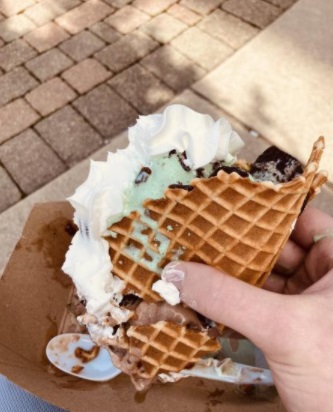 As the swimming season ends due to spring break, swimmers are left at home without the ability to congregate with friends. However, many have found different ways to relieve their boredom amid the Coronavirus. Some activities that they can participate in include biking, going shopping at retail stores, and congregating at a nearby local park.

One swimmer, David Son, noticed that a new ice cream shop had opened up near his neighborhood. Realizing this, he gathered a group of his high school friends from his swim team to go and get ice cream at the store. The form of transportation was difficult for others, however, he found a solution around it.

On the day of the reunion, David met each at their house, one by one, to gather his friends that were using bikes as their forms of transportation. By the time they arrived at the ice cream shop, they noticed the enormous menu filled with different flavors, toppings, and combos. One swimmer who accompanied David, Nate Reininga, was shocked. “I was astonished by the amount of different combinations you could create. It was like a paradise for five dollars!”

The group of friends spent the next few minutes gazing at the menu when something caught their eyes. Something they’ve never seen before. Two scoops of ice cream, drizzled in 2 different topics of their choice, wrapped neatly with a waffle cone. In other words, an ice cream taco. Intrigued by this, they all ordered one, and after a while, they received their ice cream. The friends walked to a nearby fountain and sat down on a bench while they ate their tacos.

The group began to congregate about practices and how they missed them, and overall just catching up on the past weeks that they have not been able to see each other. With ice cream running down their faces, the group laughed and made jokes with one another. However, they realized that they had made too much of a mess and were covered in the ice cream. To clean up, they walked to their nearest supermarket and washed using public restrooms. After this, the group of friends decided to go home on their different forms of transportation.