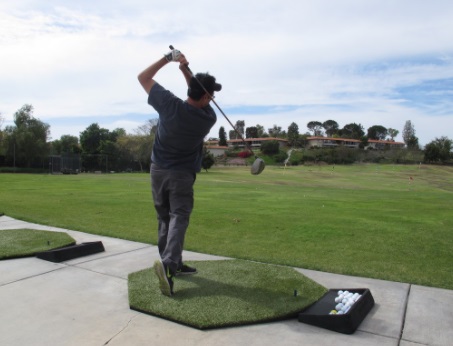 “The club made a ‘swoosh’ sound as I hit the golf ball. I crossed my fingers, hoping that the ball would go into the hole.” It was the Richmond Invitational, and Joe’s team was counting on him to make this putt. Joe Choi played for his high school team as well as playing individual golf. After playing the later for eleven years and four years of high school golf, he found several differences between the two. Of course, there were pros and cons to each type, but he found two distinct aspects that made his high school team different from individual golf: the team atmosphere and improvement.

“Everything is better when your team is cheering for you,” he stated. After Joe hit the ball into the hole, his team was high-fiving and hugging him. They had been counting on him to make the putt so that they would have a chance at winning the tournament. Later that week, he went to an individual golf tournament. When Joe made a hole in one on a challenging course, he had no one to share his excitement with. Oftentimes, he felt lonely in individual golf and was unhappy because he had nobody to hang out with. He stated that he oftentimes wanted to quit playing the individual style, because it was hard to practice every day by himself. However, he got the best of both worlds when he played on his high school golf team. All of his friends were on the team, and they would all attend tournaments together. Since high school golf was only for four months compared to the eight months of individual golf, he loved and appreciated every second of it.

Although Joe loved high school golf, he didn’t have the best results, as he was constantly unprepared. He would go out with his golf friends in the morning and would be late for the tournament. Also, at practice, he would talk with his friends and not pay attention to the game. Most importantly, he wasn’t wholly focused on his performance in tournaments and was distracted. Contrarily, he had excellent scores when he played individually. Since Joe’s mind was entirely focused on doing well in golf during individual games, it helped him perform better. He was always well prepared for individual tournaments after a good night’s sleep, arriving early and practicing a bit before the competition started. Also, his coach gave Joe tips and advice on any mistakes that he made. Joe stated that “I was so much more put together when I was playing individual golf. Unlike high school golf, I actually paid attention and wasn’t fooling-around with my fellow teammates.”

Joe was asked the question, “Do you recommend playing with the high school golf team or individually?” He responded, “I think it’s good to be a part of both. They both teach you life-long lessons that are important to have. Team sports teach you how to work collaboratively and how fun it is to work for something that will benefit an entire group of people. Individual sports teach you self-motivation and will help you to be fully focused or dedicated to the sport. I strongly believe that everything in life needs to have a balance, and I think that it is valuable to have experience in both team and individual sports.”

Joe is an example to many of us that there are benefits to be gained by both individual and group spots. Because of this, it is advised to try both types of sports, and get the best from both worlds.