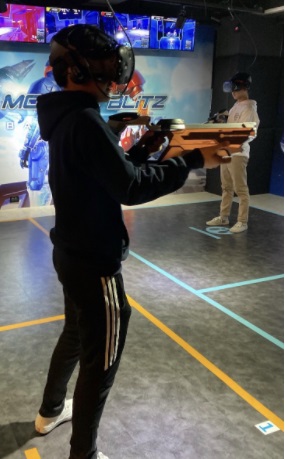 The introduction of virtual reality was a massive leap into an idea that could change everyday lifestyle, and it remains a crucial component in the field of technology. Currently, virtual reality is used in so many places and in different aspects of society, some of which include playing games with life-like interactions in the easiness of one’s home or riding virtual reality roller coasters.

Virtual reality dates back to 1838, when Stereoscopes were first introduced. Stereoscopic images, images of the same subject with slightly-differing angles placed right next to each other, are processed by the brain with more of a sense of depth. This idea was further developed in 1957, when the invention of the Sensorama provided a complete environmental experience including audio, wind, and vibrations. The Sensorama was a virtual motorcycle ride, where the user would sit down in a machine in front of a changing screen displaying a motorcycle ride through a city. Computer scientist Ivan Sutherland further developed the Stereoscope and Sensorama foundation into the first virtual reality headset, created in 1968. Since then, the possibilities have been endless. Companies can provide virtual tours of their facilities and people can guide themselves around different areas with Google Street View. Game companies, such as Nintendo and Atari, started developing virtual reality products to create 3D games.

There are a multitude of different uses that stem from virtual reality. One potential primary use is training. Whether it’s the medical field or law enforcement, virtual reality can provide a life-like and engaging simulation. With headsets and other minor equipment, law enforcement officers can partake in training simulations without real guns and scenario actors. Police training could drastically improve with a soon-to-be more advanced virtual reality. VR technology has also shown promising benefits in the medical field, opening up a new world of closer examination of anatomy than ever before, critical to increase understanding for both doctors and patients. Medical training will become even more advanced with state-of-the-art equipment that allows a 360-degree view inside of the human body. Many fields have room for improvement, and virtual reality can provide the solution for a wide range of industries.

Virtual reality is an extremely promising investment and its capabilities are endless. Many companies, including Apple, have started experimenting and using VR to expand their businesses. Since virtual reality has not been as popularized as other impactful advancements in technology, the stock price is relatively low.