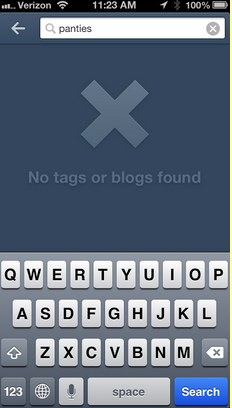 Social networking and microblogging platform Tumblr, which was purchased by Yahoo!, Inc. in May, revealed new restrictions on July 18 for “Not Safe For Work” (NSFW) and adult-oriented content.

The new restrictions will make NSFW or Adult-rated blogs unsearchable both from external search engines and Tumblr’s internal tagging system. Website staff can flag blogs as “NSFW” or “Adult” without prior notice, although users may appeal ratings to the Tumblr Trust & Safety Team.

Tumblr stated that the intent of the content control was “to be sensitive to the millions…cultures, and backgrounds with different points of view concerning mature or adult-oriented content.” Though many users agree with this intent, many also feel that Tumblr executed the restrictions poorly.

“Tumblr’s confining NSFW material to its own area of interest so it doesn’t pop up when someone’s not looking for it,” high school senior and Tumblr user Ryan Leou said. “But there has to be another way to shield access.”

“[What] standards are going to be used to decide what is or is not ‘adult’?” Tumblr user how-grey-my-heart stated on her blog. “Of course there are some instances that are clearly NSFW… [but] Fine art of all types features nudes. What about poetry [or] lyrics with sexual content?”

Other Tumblr users are concerned with the restrictions’ potential to affect blogs that do not necessarily post culturally-insensitive adult material. For example, news coverage of violence, war and protests often features disturbing imagery categorized as NSFW.

Blogs like Planned Parenthood may also show NSFW content, such as diagrams of the reproductive system and text posts on human sexuality, in order to educate their readers.

“If you’re a blogger who uses NSFW content for sex education purposes, you might as well just give up,” Tumblr user robotlyra stated in an interview with the Daily Dot. “[E]ven though your stuff is educational, it’s still going to be blocked from people who don’t already follow you.”

Shortformblog, a news media blog, began hosting an idea-share session with followers to give Tumblr constructive feedback and ideas. Some of the most popular ideas include setting NSFW restrictions by individual posts rather than by blog.