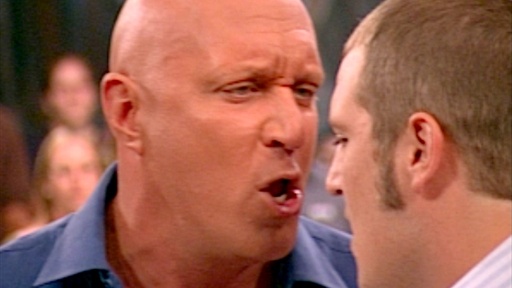 The Steve Wilkos Show, a syndicated tabloid talk show produced by NBCUniversal, has grown to be one of the most popular talk shows on television. Six years after being spun off from the Jerry Springer Show in 2007, the Wilkos show celebrated its thousandth episode last month.

Hosted by former Marine and police officer Steve Wilkos, the show usually begins with Wilkos introducing two people who are in conflict with one another. After a short interview followed by a video clip on their background stories, Wilkos takes a side and begins shaming the person he believes is lying, encouraging the audience to also take sides. Almost every single show repeats the same series: Wilkos becomes infuriated, gets violent and then starts throwing chairs and screaming into the guests’ faces.

Though the show has two million daily viewers, there is a diverse range of opinions about why Wilkos is so popular.

Some people attribute the popularity to the vicarious sense of victory that comes from watching someone scream at abusers. At the end of each show, Wilkos presents the results of the lie detector test that each guest must take before the show. After shaming the liars, he throws them off stage or has them forcibly ejected by security guards.

“Many people believe yelling at people to get their act together is bad, and calling law enforcement is much better. But often, there isn’t enough evidence to even arrest anyone. And getting arrested doesn’t always make an abuser change their behavior,” said UCLA senior Matthew Hansen during an interview with J Student Reporters.

David Lee, a former law student at UC Berkeley, said during an interview with JSR that Wilkos’ “no-nonsense” attitude forces the persecutor to admit what he/she had done.

“Wilkos can actually get people to admit to these things,” Lee contends. “His very forceful demeanour and his rather intimidating presence always forces the truth out by the end of his show.”

However, some teenagers have mixed emotions toward the way he treats his guests. Kristy Kang, a senior at Hamilton High School, believes that his shows are too focused on intimidation and shaming.

“Throughout the majority of his show, he calls the abusers terrible names in order to make the point that they themselves should not be abusive,” Kang said, “but I don’t think this actually teaches the abuser a lesson.”