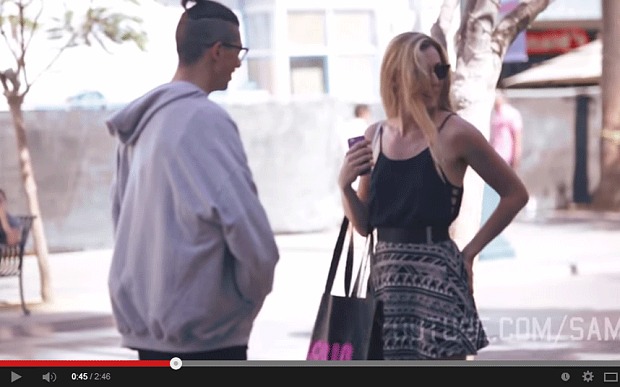 Sam Pepper, a 25-year-old British Youtube celebrity, is the latest perpetrator in a line of Youtube sex scandals. His transgressions, however, seem worse than most.

A Youtuber who runs a notable prank channel with over two million subscribers, Pepper is a significant online presence with a reputation for committing “edgy” pranks for the sake of entertainment. However, his pranks went too far with the release of a video that depicts him touching the rearends of multiple women in different locations after striking up conversations with them.

The release of the video to several million viewers has caused an uproar. The hashtag #ReportSamPepper began circulating on Twitter after the release of the video, and fellow Youtubers such as Tyler Oakley tweeted statements denouncing Pepper’s behavior. Oakley said, “Sexually harassing women is vile to begin with, but normalizing it by calling it a prank? So harmful.”

Activist Laci Green released an open letter to Pepper after the release of the videos, stating, “These videos encourage millions of young men and women to see this violation as a normal way to interact with women. One in six young women… are sexually assaulted, and sadly, videos like these will only further increase those numbers.”

While Pepper later released a video claiming that the video had been completely scripted and that the women were aware of his actions, multiple women have stepped forward to claim sexual abuse or harassment by Pepper during his time in North America.

According to Buzzfeed, an 18-year old woman from Los Angeles filed a police report with the LAPD charging Pepper with rape.

“I was just a body to him, I was not a person,” the woman said to Buzzfeed.

Sam Pepper’s actions have extended from the misdemeanors in his private life to the normalization of sexual harassment for millions of viewers. Defense for his actions could be seen by searching the #sampepper hashtag on Twitter.

“I’m sorry but [to] all these girls saying they’ve been raped by all these Youtubers. Why haven’t you gone to the police?” said @Charleyboompar.

“I see no problem with [Sam Pepper]. Seriously, I mean some [of his actions] are kinda pushy but he hasn’t done anything wrong,” said @iScream_Styles.
However, one Valencia High School senior interviewed for this article disagrees.

“As a young male individual who’s part of the demographic of viewers for Sam Pepper, I knew that what I was watching was incredibly wrong, but other guys like me might not think so,” said the senior, Shawn Barman.

“We’re conditioned to think that playing these tricks on women is okay, that it’s fun, but reading the articles and the response to Sam Pepper confirmed my gut feeling that it was just wrong. But other guys might not think so, because someone famous is doing it,” he continued.

Pepper is not the first Youtuber to have had his career marred by sexual transgressions. Tom Milsom and Alex Day are two Youtube celebrities who have admitted to manipulative and inappropriate relationships with fans.