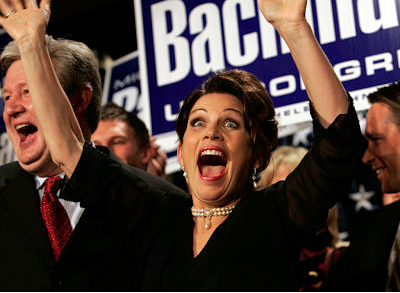 Growing up, you may have been told by a loving, well-meaning adult that you could be president of the United States someday. If you’re reading this you’ve most likely given up on that dream, but there are some people who should’ve never been told that in the first place… ever.

Meet Michele Bachmann, Minnesota’s very own Representative/serious presidential candidate for some odd reason. Putin may rear his head in Alaska, but unfortunately, Bachmann rears her head on the mainland.

Now there’s a lot of talk amongst liberal groups that Bachmann is an idiot because she’s Republican, but that’s clearly fallacious and opinionated.

Michele Bachmann is stupid because she’s insane. Plain and simple.

Bachmann, who once actually considered herself qualified to be president (shudder) and who currently serves on the House Intelligence Committee (possibly one of the only government departments that absolutely cannot, ever, under any circumstances tolerate stupidity), has no idea what she’s doing, period.

That’s right! Good ol’ Michele is throwing in the towel next year, leaving her just 12 months to get all the stupid out of her system and onto national television.

Here’s a look at some of the darndest things Bachmann has said and done.

A while back, Bachmann presided over a hearing involving John Brennan, director of the CIA, regarding the Middle East. The problem is, she had no idea what she was talking about.

Not only did Bachmann succeed in stumping Brennan with three completely made-up problems, she carried on as if she had a valuable point to deliver. As a lawmaker, she has little excuse to be that ignorant about foreign policy. But as a House Intelligence Committee member, it’s very, very frightening that she knows so little.

“Pray the Gay Away”

When she isn’t busy being ignorant, Bachmann is occupied with being a bigot. Michele and her husband Marcus own and operate a Christian counseling clinic in Minnesota, which, by the way, received over $160,000 in government aid (something Bachmann opposes). Numerous undercover videos reveal that the clinic practices “reparative” therapy- in essence, “praying the gay away.”

And if the clinic’s repeated attempts to use the Bible to discourage homosexuals from being who they are isn’t bad enough, they’re using taxpayer money which could’ve gone to poverty relief or another worthwhile cause to fund a nonsense scheme justified by an intolerant interpretation of very old book.

In this video, Marcus Bachmann explains his theories:

Talking the Talk, Running the Run

Politicians are well-known for dodging questions, but Michele Bachmann takes this one step further.

When confronted with questions from CNN’s Dana Bash about her fallacious claims on White House spending, Bachmann began running down the hallway, refusing to talk about something she brought up in Congress and forcing the poor reporter to chase her for the truth. Talk about running scared.

Bachmann’s lies are shameless. Beyond making up claims of lavish White House trips and “anti-American” congressmen, she’s moved on to using autistic and mentally retarded children to promote her political agenda.

Shamelessly ignoring decades of scientific observation and research, Bachmann claimed that vaccinations against HPV lead to brain damage, including even mental retardation… a claim leaving the FDA utterly confused. The scientific community has also called her deliberately manipulative, incorrect statements “irresponsible”. Rick Santorum took the vest, er zest, out of her ridiculous argument by logically observing that some vaccines should be mandated, and others shouldn’t.

If Rick Santorum makes you sound stupid in a debate, you’re kinda screwed.

Hope for the Future

Announced on Wednesday, May 29, Bachmann’s leave gives Minnesota an opportunity to redeem itself before we kick it out of the Union and throw it to Canada. Who knows, maybe Minnesotans might even end up with a candidate who has brains!

No matter what choice Minnesota makes, Bachmann’s vacant spot on the House Intelligence Committee will at least create the opportunity for an intelligent, capable leader to step in and make decisions grounded in logic, something sorely needed to combat the “crazies” still milling about on Capitol Hill.