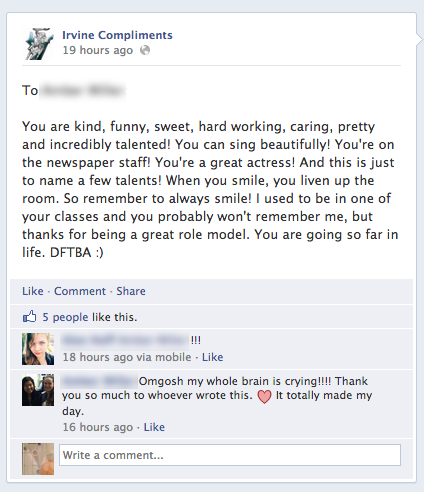 The Internet is rife with cyber-bullying, hacking, identity theft and scamming. At times, it is confusing as to why people even use it at all. But a silver lining can be found in the Irvine Compliments Facebook Page, which is working one post at a time to turn this negative environment into a positive one.

After being inspired by other compliments pages, three anonymous students joined the “cyber-graciousness” craze by establishing an Irvine High account. Classmates can now submit anonymous compliments about others to the page, which will then be posted from the account.

The compliments page trend is a positive development in light of the negativity that dominates the Internet today. According to a 2011 National Crime Prevention Council report, almost half of American teenagers are affected by cyber-bullying. Many cases of teen suicide have been exacerbated by hateful and threatening online messages. It is imperative that students take initiative to eliminate the hostility.

The Irvine Compliments Facebook Page is a step in the right direction. With more participation and activity, it could make Irvine High School a safer and more positive environment for all members of the school community.

Compliments have been directed not only at individual students but also to collective organizations at the school including Color Guard, Leadership, and  Journalism. Students have stated this makes readers more aware and proud of the various groups on campus, thus promoting school spirit.

So far, the page has reached a large number of students.  There are over 2,000 students and staff members at Irvine High, the majority of whom have Facebook accounts, and 426 have “liked” the page as of February 27.