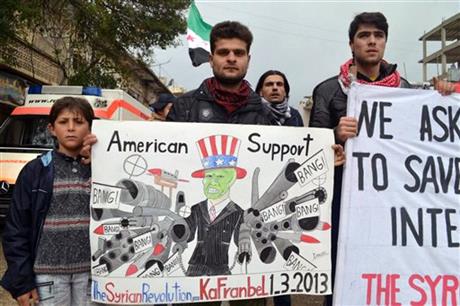 The war in Syria intensifies every day. Thousands have been killed and thousands more have been dehumanized. If these atrocities are occurring and the international community is aware of it, then why isn’t anybody doing anything? Although some countries lack resources to intervene, the United States is one of the most developed nations in the world and has access to resources for intervention. So, the United States should actively attempt to stop these human rights violations in Syria.

Some may ask, “Why the United States?”

The United States is in a unique position to intervene in other countries. According to Bradley Thayer, Professor of Defense and Strategic Studies at Missouri State University, “No other force possesses the communications capabilities or global logistical reach of the US military.”

Interventions by the United States have been successful in the past. Recently, the oppressive leader Muammar Qaddafi was captured and killed quickly after the US intervened in Libya. Why shouldn’t the US also intervene in Syria?

Roger Cohen, a New York Times Columnist, argues that the brink in Syria is now. “Inaction spurs the progressive radicalization of Syria, the further disintegration of the state, [and] the intensification of Assad’s mass killings…” wrote Cohen in February. “It is time to alter the Syrian balance of power enough to give political compromise a chance and Assad no option but departure.”

Syria’s situation intensifies every day, and yet, the United States refuses to take action to solve the egregious human rights violations that are occurring. As a result, Syrians are beginning to resent American power.

The United States is one of the only nations powerful and capable of protecting citizens when other international peacekeeping entities fail or are hesitant to do so.  Intervention is the moral thing to do.  Victimized countries often have little or no means of defense or protection for their people. Doing nothing about the situations in other countries is equivalent to directly killing their people, as inaction is action when it comes to these circumstances.

In order to uphold human rights and dignity in the world today, the United States should take measures to uphold intervention in other countries.

1 thought on “US Should Intervene”