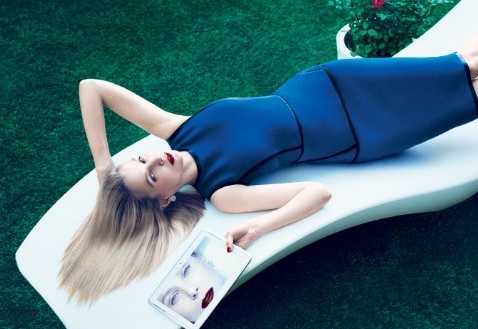 Mayer and Davis have come under fire after what some say was poor judgment. According to Peggy Drexler, an assistant professor at Cornell University studying sex and gender, this is “a time when when women in the workplace desperately need role models.”

Yet Vogue’s portrayal of these women has undermined their achievements and successes as women in male-dominated fields by treating them as subjects to another fashion article one would find about the new face of some high-end clothing label.

Vogue’s glamorization of Davis is a vain and superficial portrayal that marginalizes Davis’ achievement in fighting an abortion bill and immediately goes on to detail the fame she’s earned in its aftermath. It describes Davis’s twelve-hour filibuster, during which she spoke against a controversial bill regarding abortion access that would restrict the reproductive freedoms of women, flatly with a mention of her “pink Mizuno running shoes and a sky-blue Escada day coat” that accompanied her back brace. The article briefly touches on the filibuster debate then proceeds to jump to the “overnight sensation” Davis became after the occasion, scoring interviews with Meet the Press and becoming the subject of the hashtag #StandWithWendy.

Vogue does take a greater effort to recognize Mayer’s successes as CEO of Yahoo!, which include the purchase of Tumblr, steadily increasing stock prices and a surge past Google to top US web rankings in July. Yet author Jacob Weisberg doesn’t fail to bring attention to Mayer’s “red Michael Kors dress with a gold belt and an Oscar De La Renta cardigan.” He then brings readers to an elite cocktail party thrown by Mayer where Silicon Valley’s top entrepreneurs sip margaritas in her backyard, a “green lawn large enough to accommodate a skating rink.” A previous Vogue feature on Mayer, from 2009 during her time at Google, describes her as “Oscar de la Renta–obsessed” within its first sentence.

It’s true that Vogue is a fashion and glamor magazine. However, these portrayals contrast sharply with the way GQ, a men’s “fashion and lifestyle” magazine, wrote about Vice President Joe Biden in a July article. GQ’s mention of Biden’s fashion choices are restricted to gentle mockery of his signature Ray Bans and a line about the distinctive “smooth blue suit, white pocket square” Biden wore to the pope’s inauguration. The article neglects to mention the Vice President’s fashion preferences or the labels on his clothes.

Like Biden, Mayer and Davis aren’t runway or fashion models. Nor are they socialites born into their wealth. They are role models to women all around the world and should not be held or written about in the same manner that any fashion model or socialite would.

According to a Women in Technology report, only ten percent of chief executives in US tech companies are women. The Texas legislature is only 21% female. Yet Mayer and Davis have have been successful in these penetrating fields dominated by men. As influential figures expected to wield their power wisely, the merit in their works should not be eclipsed by the glamor and affluence they may have found in their success.

Vogue did what it does best: fashioning and glamorizing. At least it is profiling these women. Yet Vogue and magazines like it should be more flexible, adjusting their style and focus to address content that could have a positive impact on other women and society.