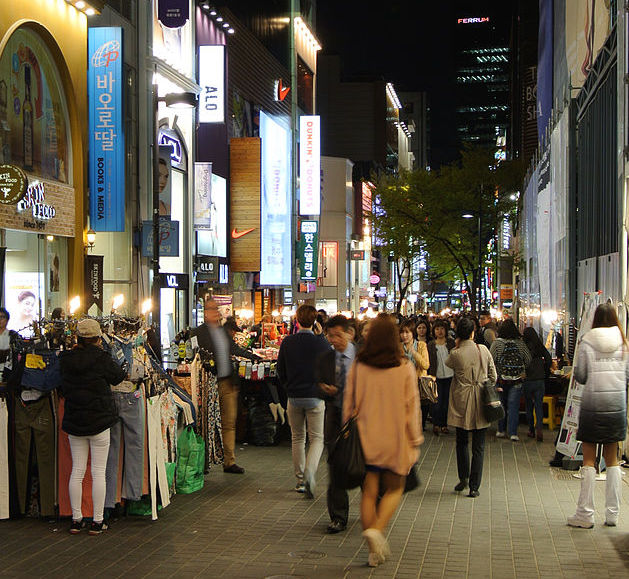 I remember seeing my grandmother’s back, hunched over a small pot as her hand swam through a milky pool, pushing rice pearls through the water. Later, over a meal of rice, bean sprout soup, and bulgogi, she spread her hands for me like an open book. I searched for hangul between the lines, but instead I only found hidden cracks from years of pushing rice through water in preparation of her family’s meal. Two years later, those same hands grasped mine at the airport, shoving a bag of sweet satang for the plane ride to Mi Gook. They implored me to remember my past and the country where my grandmother had once cooked rice.

I didn’t lose touch entirely with my motherland. I was fortunate enough to grow up in the Los Angeles area, where Korean-Americans are in abundance as one of the fastest growing second generation immigrant groups. But we were a unique brand ourselves, neither Korean nor American. We abhorred the idea of being seen as “fresh off the boat,” of being too competitive and obsessed with grades, of dressing like K-Pop stars, and of having to deal with the broken tongues of our parents in front of the condescending smiles of English speakers. We were not fresh off the boat — we were cool, relaxed, and assimilated. We tried to be Americans as much as we could be.

“It’s embarrassing to have people assume things about you simply based on your race. Maybe that’s why I spent a long time in denial about having to accept myself and my heritage,” said Eugeni Lee, a Korean American graphic designer who arrived in America when she was in middle school, in an interview with me.

“I think this happens to a lot of Korean Americans, especially those in the second generation. We try to assimilate and then end up losing our Korean heritage.”

According to a survey conducted by JSR, 81% of Korean American teenagers feel more comfortable speaking in English than Korean. Knowledge of Korean history and culture also ranges mostly from none to the bits earned from watching episodes of historical Korean television shows with parents. Active education about our native country is minimal, limited to Korean school after church services and popularized historical dramas.

I am no exception. When I visited Korea for the first time in 11 years, I also found out that I suffered from a metaphorical amnesia. I had forgotten the winter winds and the bustling sound of Seoul’s people floating next to the smoke and smells from the warm street tents that broil spicy rice cakes and pig intestines.

Despite the familiar language and culture, everything felt alien. My motherland was no longer my homeland.

While this was a saddening realization, it was inevitable. I had fully adapted to my new life in the United States, so much that my childhood would be defined by American ideals and culture no matter that I spoke Korean or ate Korean dishes at home. Yet this is not a tragedy; rather, cultural assimilation can become a gain.

“Personally, I feel like I’m a lot more open as a person because I was born in America, and especially because I’m Californian. We’re surrounded by a lot of diversity, which makes it pretty different from Korea’s homogenous culture,” said Chaereen Pak, a Korean American senior at Valencia High School (VHS), when I spoke to her.

However, despite how “American” Korean Americans may have become, there is an overwhelming feeling of connection to the homeland. Despite the large group that indicated fluency in English over Korean in the survey by JSR, respondents also said that they regularly consume Korean music and entertainment alongside Western entertainment.

“Even though I’m surrounded by Taylor Swift and Justin Bieber and ‘The Vampire Diaries’ and ‘Gossip Girl,’ I still look for Korean media or get sucked into it by a friend or family member,” said VHS senior Christina Hong.

“Some [Korean Americans] might not relate to Korean entertainment, but it’s still pretty culturally descriptive of my interests,” she added. “Even if I don’t look for it, it’s there because of my family, so why not?”

We believe in the simple concept that through Han, we are one, and that despite the miles of physical and cultural distance between us, this relationship can never be broken. The complexity of this relationship finds its roots in the 5,000 year history, in the colorful swirls of silk hanbok skirts and the painful memory of our oppression by Japanese neighbors. Even today, the driving political goal of the free South Korean country is for reunification with their lost North Korean brothers. This feels representative of the same feeling of unity I had with the people around me in my last visit.

And in this, I find that Korean Americans are in a position that shares a heart with the Korean people and a mind with the American spirit. It is a unique position that does not require isolation in a cultural wilderness, but an adjoining seat at a warm table full of both Americans and Koreans.