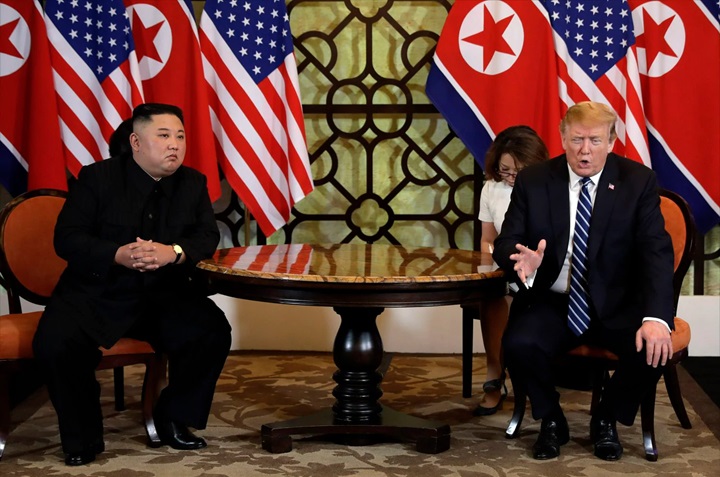 The United States is easily the strongest nation in the world while North Korea (DPRK) can be considered one of the most belligerent nations in the world. This is because DPRK is one of the few communist countries that still stays true to authoritarian beliefs, unlike China or Cuba who have granted its citizens some freedoms.

The United States practices democracy with the idea of liberty and freedom rooted in its history. The DPRK, on the other hand, practices a dictatorship who gives its citizens no freedom like something out of a George Orwell novel. The United States practices diplomacy through peaceful means while Kim Jong Un, the leader of North Korea, practices diplomacy with the threat of a military strike and uses its nuclear program as leverage in diplomatic negotiations.

With that being said, North Korea is a country that has been sanctioned by the United Nations countless times and has all failed to halt the progress of the nuclear program. It can be said that Kim Jong Un knows that the nuclear program is the only piece of leverage he holds in the international community so without it, DPRK has no bargaining chip. This is why he puts so much emphasis on the program because, without it, North Korea might as well be defenseless. The only source of funding for this program that the DPRK receives is through China and it relies on it for help continuing it. So an embargo on North Korea would not effectively crush the North Korean economy but also the nuclear program stopping it indefinitely.

Strategic patience is a policy in which the Obama administration was willing to wait for the regime to decide on denuclearization. This didn’t quite work because Kim Jong Un is a sensible man and wanting the survival of his country, was and is never going to let go of his nuclear arsenal. This is something that president Trump has accepted and is pressuring Kim Jong Un with sanctions and taking a very aggressive stance against the nuclear program.

South Korea is however on a very different boat than president Moon Jae In calling for all countries to come to the negotiations table. President Moon thus far has seemingly tolerated the regime’s actions with the only response being a verbal condemnation and nothing much else. Alison Moon, a freshman at Immaculate Heart High School, when asked about this said, “if the United States and Trump don’t continue to be aggressive towards the Kim regime, then Kim Jong Un will just keep expanding his nuclear arsenal.”  But when asked about her thoughts on Moon Jae In’s stance on the DPRK, she stated, “he is just focused on maintaining peace in the Korean Peninsula. Two very different leaders with two very different approaches to this issue.”

If the United States does not continue to pressure the DPRK and set sanctions or at least call them to more negotiations such as the one in Hanoi, then there are two possible ways this could unfold. The first is North Korea does not denuclearize because they know that without their nuclear arsenal, they are nothing and have no leverage in negotiations. The second is South Korean president Moon Jae In and Kim Jong Un meet again in a very similar fashion like they did in 2018 and somehow negotiate a way to denuclearize. As pretty as that sounds, it is highly unlikely.

No response to the escalating situation on the Korean Peninsula means that the North Korean regime does not stop expanding its nuclear program. Without pressure, North Korea will never learn or care that there are major consequences when sanctions are defied.  And the advancement of the program puts even greater risk to the countries near the rogue nation, such as Japan, South Korea, and also the United States.

There are a few possible solutions. The first is to convince China to stop trade and to stop supplying the regime with the supplies for the nuclear program. The second is to increase a military presence in North Korea that sends a clear and unmistakable message. The third and final possible solution is to increase sanctions and increase the enforcement of them.

This will reduce the effectiveness of the program and if not halt, then slow the progress. If none of these three things is undertaken, then the buildup of nuclear weapons on the Korean Peninsula at the helm of a ruthless dictator who is not scared to use them is all but inevitable.