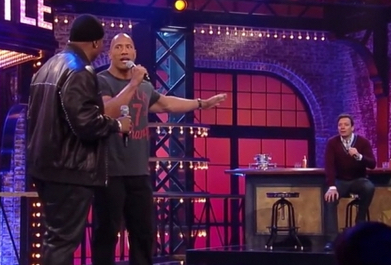 “Lip Sync Battle” was once a short segment on “The Tonight Show” in which two celebrities attempted to lip sync popular songs. Though this segment never appeared regularly, it has provided some of my favorite moments of Jimmy Fallon’s show.

That being said, why is there now an entire TV series dedicated to it?

Overexposure occurs when a product is so good that the company responsible for it exploits it until it is not good anymore. When a product isn’t well known, its makers use whatever they have to make the best product they can. But then, products can get so popular that the makers use all the money they’ve earned to do whatever they want with it – often ruining what was good about it in the first place.

The battles originally took place in Fallon’s studio, and the best battles had the celebrities lip sync the songs with no props. For example, Stephen Merchant rapping DJ Jazzy Jeff and the Fresh Prince’s “Boom! Shake the Room” is great because of his simple use of facial expressions and body motions.

However, for the new show, Spike TV has built an entirely new studio. The show’s budget allows for ridiculous costumes, a large sign that reads “Lip Sync Battle,” and the hiring of LL Cool J as a host. Yet, viewers need neither a championship belt given to the winners of the battles nor Merchant lip syncing in a cage with scandalous attire and background dancers. We just need the energy of the performances themselves.

This problem doesn’t restrict itself to something as large TV programs; Internet videos can also be affected by overexposure.

For example, when Ryan Higa made the video “How to be Ninja” for his Nigahiga Youtube channel, he could only use his friends and the things he could find in his house. He didn’t really have a script, and the visual quality of the video wasn’t high, but viewers appreciated his desire to entertain people.

However, with the money he earned from YouTube ads, Higa was able to make more elaborate videos. To some, his jokes started to fall flat.

According to UC Berkeley student James Parker, Nigahiga stopped being funny “because [Higa] had to cater to a [larger and more general] audience and had different motives for [making videos]. [The videos] seemed fake instead of real.”

If this is what “Lip Sync Battle” will come down to, then I’m going to stop supporting Fallon once the Wheel of Impressions gets its own show.