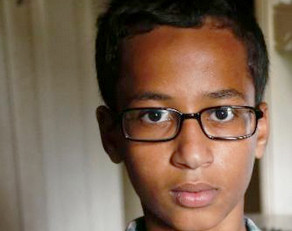 Last month, a freshman at MacArthur High School in Irving, Texas was arrested after bringing a homemade clock to school to show his engineering teacher. It is clear that the police mishandled the case, and people around the world are outraged by what they view as an act of racial profiling.

Ahmed Mohamed, 14, was taken out of class on September 15 and interviewed by police on suspicion that the clock was a bomb. According to police, the device was “clearly” meant to look like a bomb. Despite his insistence to the contrary, they refused to believe that Mohamed only built the device as a clock and that “there was no broader explanation” for bringing such a device on campus.

Although none of the five police officers handling the case had met Mohamed, one of them is reported to have distinctly said “Yup, that’s who I thought it was” when he saw the brown-skinned Muslim of Sudanese descent. For maintaining that the clock was indeed a clock, and not a weapon, Mohamed was escorted out of school in handcuffs and suspended for three days.

The uproar over the arrest comes at a tense time, as the United States is currently grappling with a growing trend towards Islamophobia.

“[The biggest issue is] probably the inconsistency,” said Jiho Kim, an undergraduate student at Brown University who is studying political science, in an interview with JSR.

“If you consider that the kid was reported for a bomb threat, then what are the standard procedures that occur when there is a bomb threat?” Kim continued. “You don’t just arrest the kid. You also have to initiate a school-wide lock-down to ensure the safety of the school’s students.”

Kim concluded, “But that didn’t happen, which leads me to believe that the school didn’t seriously consider the situation to be a bomb threat. If that is the case, then the whole situation is pretty messed up.”

According to a letter the school sent to parents, the actions were taken because “[students’] safety and well-being is always [the school’s] top priority.” However, there are several logical problems with the school’s position.

The clock was first discovered by Mohamed’s English teacher, who heard the clock beeping and confiscated it despite the student’s insistence that it was not a bomb. Yet it was not until near the end of the day, in sixth period, that Mohamed was taken out of class. If the teacher had genuinely mistaken the clock for a bomb, she should have done more than confiscate it. There shouldn’t have been such a gap in time between when the bomb was confiscated and the interrogation. If school officials and police were concerned about safety, they should have detained Mohamed earlier and locked the school down.

According to Leo Lee, a senior who has observed the news from Seoul International School (SIS) in Korea, the school’s actions reflect racism.

“After seeing the photo of Mohamed’s clock, I can sympathize with Mohamed’s English teacher… However, I am afraid I do not sympathize with the police and the school administration’s response. Their reactions seemed to be more aligned with unreasoned discrimination through racial prejudice rather than fair protocol,” Lee told JSR.

He went on, “They have forgotten the fact that Mohamed is another American citizen, protected by the law and the constitution, before he is [a Muslim] who happens to share a [religious] identity with [the late Saudi terrorist leader Osama] Bin Laden.”

“It is questionable whether the officers would have said ‘Yup. That’s who I thought it was’ had a Caucasian teenager walked in,” Lee continued. “This incident exemplifies the inappropriate application of racial profiling, blatantly violating Mohammad’s right to equality.”

Although noted xenophobe Sarah Palin took to Facebook to slander Mohamed and say that his clock was clearly not a clock, the bright side of all of this is that Mohamed has found massive public support and has been invited to visit the White House, Facebook, Google, the campus of the Massachusetts Institute of Technology (MIT), and Space Camp. Hopefully America will learn from this mistake and strive to encourage more young people like Mohamed to passionately pursue science and math.