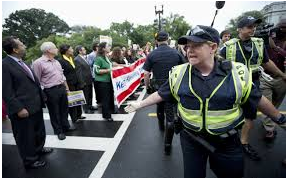 In early August, supporters of immigration reform were arrested before the US Capitol building for causing a disruption in the normal state of affairs amid little fanfare and even less general awareness.

The bill has received much attention and has been emblazoned in the legislative history of our times, yet the protestors themselves have become little more than the human equivalent of will-o’-the-wisps — little known and hardly a matter of concern to many.

“I guess they wanted to help out,” Alice Choi, a rising senior at Los Angeles Center for Enriched Studies (LACES), remarked. “[They wanted to] make a statement about immigration reform [and partisan divides] on legislative action… But still, no one knows about them.”

“I didn’t even know about them until very recently,” Sazia Mostafa, another LACES rising senior, said. “I think that says a lot. Not a lot of people were aware of them and their situation.”

“In terms of what they tried to do and how they tried to help, I think that they’re very [commendable,]” Mostafa continued. “It takes a lot of organizing and planning to get to where they got. But I don’t think it helps.”

Was the movement ineffective? Perhaps. But counterintuitive as it may seem, that should not be a deterrent. There is much more at stake here than a short stint at prison. Though many ignored their actions, it is still important to take away the human message implicit in their actions. A bold statement of principle was being made here and to discount that is to discount activism in our day-to-day lives.