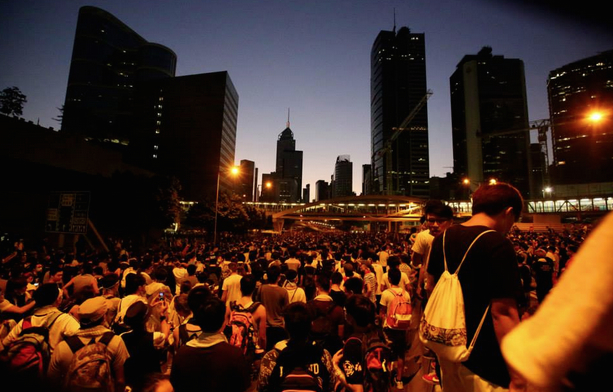 Media has been reporting for weeks about the democratic protests taking place in Hong Kong, China. And while we may see news about them when we scroll up and down our webpages or smartphones, it takes more than a glance at a screen to really understand the turmoil of the other side of the world. Yet, as global citizens we should be cognizant of the struggles and political unrest.

Also known as the “Umbrella Revolution,” the movement that has been raging across Hong Kong consists of pro-democracy protesters discontented with the central Chinese government stemming from its governance of Hong Kong, which was a British colony until 1997. Because of its colonial history, Hong Kong is supposed to have a separate political system that puts more emphasis on transparency and due process than the system governing the mainland.

The Chinese government, however, has failed to uphold this notion of transparency by recently instituting a policy that gives it power to veto potential candidates for elected office, thus assuring that only candidates who conform to government policies will be elected. Protesters, advocating pure democratic systems, demand that the government give Hong Kong more political independence and that the current Chief Executive of Hong Kong, Chun-ying Leung, resign from office.

Protesters have taken to the streets. They first started with peaceful protest but began fighting back after police began to employ pepper spray, rubber bullets, and tear gas to remove them.

Paul Yang, a student at Li Po Chun United World College in Hong Kong, lamented the police brutality in an interview with JSR.

“My friend was attacked by tear gas, though lucky, she only suffered light burns on the skin and [was unable] to speak for half an hour,” Yang said. “What enrages me is the fact that she was at the First Aid station, helping out with people who [were injured] during the march.”

Demonstrators are also retaliating against another abuse they have faced: a wave of government restraint on their freedom of speech. The Chinese government has long been shutting down mainland access to international social media, blocking sites such as Facebook, Twitter, and Google. Now Beijing has also banned Instagram and news websites covering issues in Hong Kong and is censoring mentions of the protests on Weibo, a microblogging site similar to Twitter.

Qingy Tuan, a student at Hangzhou Foreign Language School in Hangzhou, China, criticized the Chinese government’s handling of social media in an interview with JSR, saying, “I believe that negative responses on the mainland result mostly from the government’s restraint on social media. When I looked at the local social media, I was shocked how little some people know about what’s going on in Hong Kong.”

The Chinese central government is directly taking away its citizens’ freedoms of speech and assembly, rights that we as Americans consider to be ingrained in our government and citizenry. Because we are privileged to have these freedoms, we have an obligation to not turn a blind eye to the injustices occurring in other countries.

“Regardless of your political stance,” Yang told JSR, “please pray for Hong Kong. We need your help. The help might not come in materialistic form, but the increased awareness of this issue… will definitely aid the movement in one way or another in the future.”

We should raise awareness and become cognizant of the movement in Hong Kong. We can never call ourselves true proponents of democracy without supporting the international struggle to promote it.