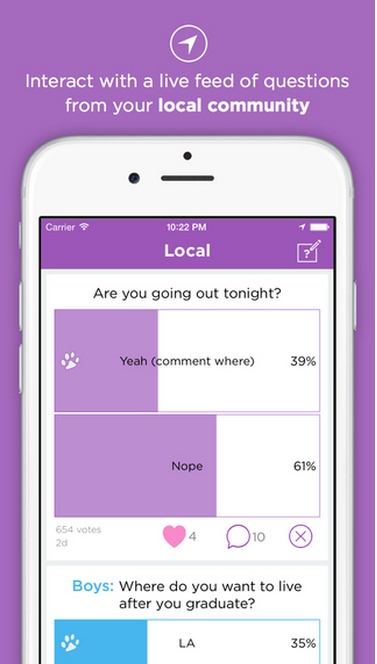 What’s Goodly, an anonymous polling application for smartphones that has been gaining popularity, is causing concerns about the platform it sets for cyberbullying. Due to these bullying issues, Harvard-Westlake has banned the use of this app on its WiFi network.

However, students can still use the app with their cellular data when not connected to the school’s network.

Users on What’s Goodly anonymously vote on polls made by others or create their own polls. The app allows people to ask questions regarding dating, classes, teachers, sports, and sex they would be embarrassed or afraid to ask outside of the app. As polls only come up to those who are in the general location of the people who create them, the app helps users of the same school and city communicate with each other.

Yet, there have been problems with bullying as people have made polls about specific people.

There have been many polls about certain students, comparing their popularity and linking them negatively with drugs, alcohol, or sex. As these polls are open to many and are anonymous, they create problems with cyberbullying because people can get away with a lot more than they can elsewhere.

In an interview with the Harvard-Westlake Chronicle, app co-founder Chris Sebastian said his team was working on new features that would make it harder for cyberbullying to occur. The app does try to suspend users that mention specific people’s names, but many have still gotten away with it.

“I understand why people would be offended. Although for the most part, the app is for fun, there has been bullying happening,” Brennan Lee, a sophomore at Harvard-Westlake told JSR.

“It’s not fun and it’s a big deal because it can offend people,” junior Jaebok Lee said.

“I think anonymous apps are just terrible in general because they provide an opportunity for people to bully others. Students need to learn bullying is never okay and being anonymous doesn’t change that,” Carolyn Hong, a sophomore at Harvard-Westlake told JSR.

Another anonymous app, Yik Yak, has been linked with more extreme cyberbullying in the case of the murder of Grace Rebecca Mann, a student leader of the Feminists United group at Virginia’s University of Mary Washington. Mann was harassed on Yik Yak before she was killed in an April 17 incident that was motivated, allegedly, by a former rugby player’s resentment of criticisms made by Feminists United about the school’s team.