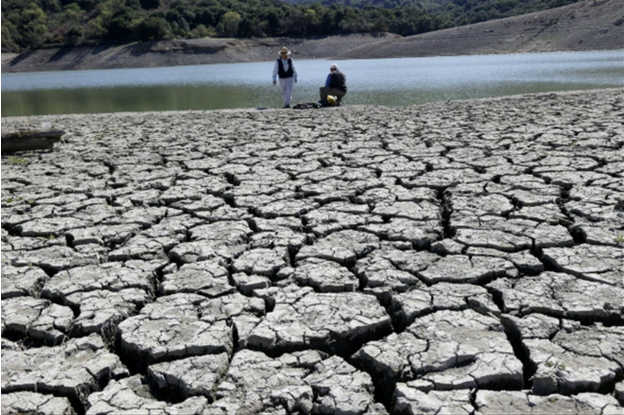 California has been facing a severe drought that, according to several metrics, is the driest and most widespread drought on record. Since reliable measurements were not developed until the 1890s, that means that this is the worst Californian drought in at least 120 years.

The state, known for its arid conditions and dry seasons, has had periodic droughts in the past. However, most of the droughts have not been prolonged, and there has been occasional rainfall.

Yet the current drought, which began in 2012, has reached groundbreaking standards. California gets a score of -6 on the Palmer Drought Severity Index, which uses a supply-and-demand model and measures severity based on temperature, precipitation, dryness, and other factors. A score of -4 or lower indicates extreme drought. Northern California’s Lake Oroville is at 32% of its 2011 level, and a UC Davis study published in July estimates that the state has lost more than 2.2 trillion gallons of surface water.

The drought has already affected the lives of millions. As the top agricultural producer in the nation, California depends on water as an essential resource. The lack of water severely destroys the state’s net output of crops, such as avocados, almonds, grapes, and impacts not only Californians but the whole US.

In addition, the drought directly impacts people’s daily lives. Without a stable supply of water, aspects of life such as survival, personal hygiene, cooking, cleaning, and recreation are at risk. Droughts also raise the likelihood of wildfires in arid regions.

“The drought in California affects many aspects of my life. I’m always wary of how much water I use because I know that we can’t afford to waste a single drop,” said Anny Huynh, a sophomore at Evergreen Valley High School in San Jose, during an interview with JSR.

Despite how vast the drought has been, people are taking initiative to conserve water, such as shortening their showers and turning off faucets when they are not in use. People have also opted to stop watering their lawns and to invest in water-saving washing machines. Save Our Water, a large campaign for the conservation of water, provides informative tips for saving water and has been promoted by celebrities like Lady Gaga.

“I was out of state this summer to visit my family in Virginia, a humid and rainy state, and I saw a pamphlet at a supermarket about conserving water. It had mentioned ‘turn off the faucet when you’re brushing your teeth!’ and I thought that was really strange seeing as it’s common sense in California to not let water run like that,” added Huynh.

“I’m actually pretty scared of how the drought will affect the future. That’s why I’ve been doing what I can to conserve water, like using my leftover water for the plants,” Karly Nguyen, a resident of Northern California, told JSR.

Yet not everyone believes that personal conservation will help.

“I think [the drought] is out of our hands because the water we use for agriculture can’t be made up by cutting showers short or leaving our lawns dead,” said Christy Tak, a sophomore at Valencia High School, in an interview with JSR.