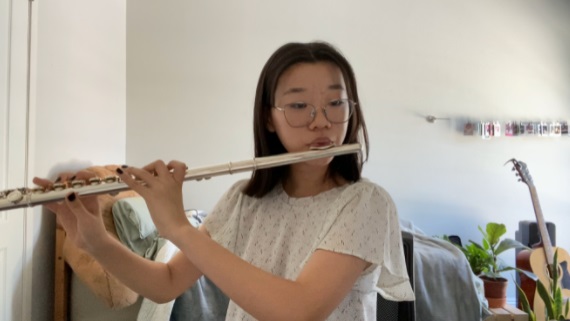 During the pandemic, orchestras have not been able to gather together and perform. Because of this, different musical ensembles, such as orchestras and bands, have had to adapt and create ways to replicate the sound of a live orchestra as best as possible. People who have never played with a musical group may not understand the importance of listening to each other, but for musicians, attention to those playing around them is vital. Orchestras and bands are all about cohesiveness of sound and creating an overall feeling or “vibe” that the audience can relate to through the music they play. It is extremely difficult, however, for musicians to do this without practicing together in person. Online video platforms such as Zoom and Google Meets will often distort the audio quality of instruments, making it much more difficult to play together. This is why the way ensembles rehearse has drastically changed. Previously, when musicians could play together in person, rehearsals consisted of the entire orchestra or separate instrument sections playing together. Now, during video rehearsals, practice is often conducted individually, where one person will play with their mic on and others will play along while muted. This allows musicians to play along with at least one other person, but it’s still not as efficient as playing in person.

When it comes time to record an actual performance, many people may be curious as to how a full orchestra can play together without ever actually playing at the same time. Because video conferencing platforms make it impossible for musicians to record at the same time like a live orchestra, musicians will pre-record themselves playing their parts and editors will edit those parts together. There are specific steps that musicians go through before, during, and after they record their parts of a piece. For more professional musical ensembles, like college and city orchestras, musicians most likely have a more advanced recording setup, with mics and cameras. Yet, for the amateur musicians like a student in a school band, recordings are most often done on their phones.

One of the most important aspects of the recording process is the click track. Click tracks include different audio cues like a metronome, a pre-recorded version of the piece being recorded, and rehearsal numbers. A metronome is a steady click or beat at a designated tempo, while rehearsal numbers are a way of dividing up a large piece of music. A click track helps the entire orchestra stay together. Usually these are not used when ensembles are playing live because musicians can hear each other, but now musical ensembles are using them to allow the musicians to play at the same tempo when they are physically apart. Once musicians have individually recorded themselves while listening to a click track, they will then send their recordings off to be edited into a full performance.

Through these methods, musical ensembles have been able to find unique ways to continue putting on performances, which bring people joy through music during the pandemic.