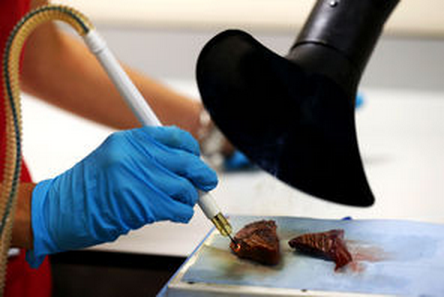 Researchers are currently testing a new device designed to enhance removal of cancerous tissues in surgical procedures. Developed by the Department of Surgery and Cancer at the Imperial College London, the iKnife may help surgeons deal with problems such as not being able to cut out all of the cancerous tissue.

“This sort of technology guarantees a great deal more precision about what you cut out,” Department Head Jeremy Nicholson said in an interview with Voice of America’s Jessica Berman. “You are much more likely to have removed all the offending material, whatever that is, and you are also much more likely not to have cut out good stuff.”

The iKnife is a type of “electric scalpel,” a tool which cauterizes tissue with electricity. The new device has the ability to identify growths as cancerous or benign in less than five seconds.

“One can sample a bit of tissue and the result is displayed on the screen in a second. It allows fast analysis and more sampling points,” Imperial College London chemist Zoltan Takats said.

Initial tests are promising. However, some physicians think the iKnife will not be necessary.

One such doctor, surgical oncologist Joseph Kim of Duarte, Calif, stated that the iKnife would be an unneeded addition to his surgical tools.

“It’s forcing you to burn tissues in areas you wouldn’t burn,” Kim said. “The type of operations I do, I’m not sure I’d want to change.”