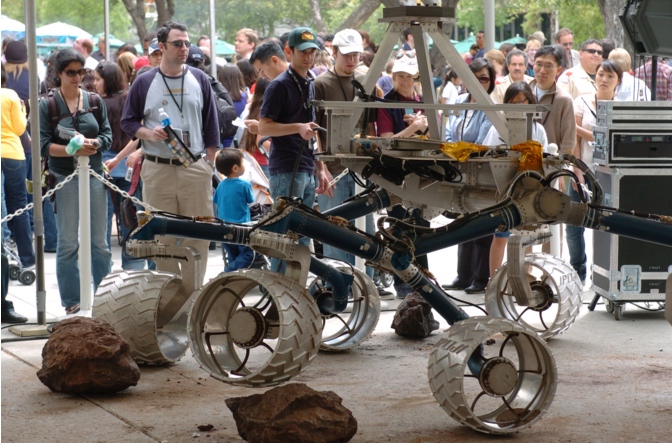 We all want our questions about the universe answered. Fortunately, NASA’s Jet Propulsion Laboratory (JPL) is here to answer them.

Many important questions, like “What is the purpose of life?” and “Are humans alone in the universe?” remain unanswered. Yet JPL is making progress on those questions, and the organization opened the doors to its La Cañada Flintridge headquarters on Sunday, October 11 and Monday, October 12 for an annual open house where it revealed out-of-this-world facts and ideas to the public.

As reported by the California Institute of Technology (CIT), the event drew over 45,000 visitors despite temperatures that reached over 100 degrees. In fact, the attendance was so large that many visitors were turned away from entering the lab.

Cecilia Cheng, a JPL employee, told JSR, “It’s great to see such a huge group of adults and children travel from all over the country to come see what we have here. This is truly a one-of-a-kind experience for everyone who participates in the event.”

Myriad mind-boggling projects, robots, and ideas were on display. Replicas of the Mars Curiosity rover, the most technologically advanced rover ever built, were among the most popular attractions at the event. These identical copies of Curiosity, which has been on the Martian surface since 2012, demonstrated the nifty tricks the machine can perform. Intense movies that brought the unknown parts of the universe to life were also a popular attraction in the auditorium.

The sheer amount of things to do was almost overwhelming. Photo booths, movies, rovers, rocket demonstrations, and lectures by esteemed experts were just some of the ample opportunities for exploration at the open house.

The open house wasn’t just educational, however. Fun activities for children were available, and food vendors had a variety of savory snacks.

Luckily for San Fernando Valley and San Gabriel Valley students, JPL is convenient to several schools. Some classes offered extra credit for those who attended the event, but students report that it was not a boring extra credit opportunity.

Jin Kim, a freshman at La Cañada High School, commented “My first thought was that the open house would be boring, especially because I’m not an avid scientist, but I was surprised at the variety of attractions. I would definitely go again.”

The 2015 JPL Open House provided attendees with fun, intellectual opportunities to dive into the world of science.