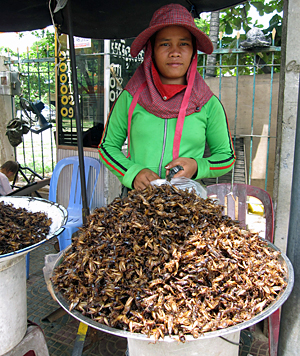 At an international conference on May 13, United Nations Food and Agriculture Organization (FAO) Secretary General Jose Graziano da Silva announced that by eating more insects, we could be able to solve the food shortage problem and even environmental problems.

Despite all these advantages of eating more insects, it is hard to popularize this because many people are not used to eating insects at all! To solve this problem, FAO has suggested that restaurants create new dishes using insects. According to FAO, the first thing we must do is to raise the status of insect foods.