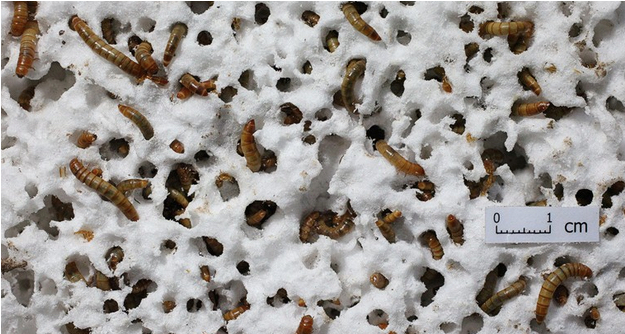 Stanford researchers, in collaboration with researchers in China, have found that darkling beetle larvae – commonly called mealworms – can survive on a diet of Styrofoam and other forms of polystyrene due to microbes inside their guts that can biodegrade the plastic during the digestion process.

According to the Environmental Protection Agency (EPA), each year Americans throw away around 2.5 billion Styrofoam cups. Yet, most Styrofoam can’t be recycled. Moreover, this non-biodegradable, synthetic polymer can take decades or even centuries to break down.

Wei-Min Wu, a senior research engineer in the Department of Civil and Environmental Engineering at Stanford, fed worms, just a centimeter or two in length, 34 to 39 milligrams of Styrofoam a day. The mealworms that ate the Styrofoam were as healthy as those on a normal diet after a month, and their waste appeared usable for soil.

Nicole Cho, an AP Environmental Science student, said in an interview with JSR, “I think mealworms can be an hero to environmental problems since we are throwing away too much Styrofoam.”

“It is a win- win situation. Mealworms get to eat food, and we can help solve the problem of plastic pollution and use to add to soils where crops are grown,” Cho added.

In addition to mealworms, there are other organisms that can help us offset the damage we do to our environment.

For example, whales help to offset carbon in the atmosphere because nutrients in their feces help make carbon more accessible to smaller organisms and stimulate the growth of phytoplankton that pull carbon from the atmosphere. This natural cycle provides a cleaner and healthier breathing environment for all animals. Plants including trees, vegetable crops, and shrubs also help reduce pollution decreasing the amount of carbon dioxide in the atmosphere and converting it to oxygen, thereby eliminating toxins.