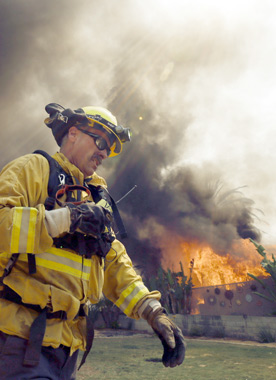 A series of fires broke out in the county of San Diego in Bonsall, Camp Pendleton, Carlsbad, Lakeside, Oceanside, San Marcos, and Scripps Ranch on Tuesday May 13, ravaging homes and reviving images of the 2003 and 2007 wildfires that burned through over 200,000 acres in Southern California. Governor Jerry Brown and Mayor Kevin Faulconer quickly declared a state of emergency in the county, prompting evacuations and closing schools throughout the district.

JSR spoke to several residents to learn their perspectives on the wildfires.

“This is not nearly as bad as the wildfires in 2003, but of course residents are still worried,” said Kay Kwak, a resident of Scripps Ranch, where a series of brush fires were quickly doused Wednesday evening.

She told JSR, “Schools are closing and my kids are at home, but at least they are safe.”

The wildfires that broke out in the Bernardo and Santa Fe neighborhoods last week were not unexpected given the Santa Ana winds and high temperatures in the afternoons. Many residents who lived through the earlier fires can remember the magnitude of the destruction they caused. During the fires in both 2003 and 2007, schools remained closed for one to two weeks as many families had fled the impacted areas.

“I remember the 2003 wildfires so vividly though I was only six,” said Anjana Srinivas, a junior at Scripps Ranch High School, in an interview with JSR. “I remember walking out onto our driveway and seeing ashes all along the roads. We had to wear masks to keep from inhaling the air.”

Ryan Seo was one of many residents in Scripps Ranch who were evacuated during the wildfires in 2007. “I can recall police going through our neighborhood and telling us to evacuate immediately, so we packed and left,” he told JSR.

“We had a pretty good view of the burning canyons,” he continued, “and the sun was blood red. The heat was so intense that we had to get out.”

Residents throughout the county have lauded the firefighters who spent their evenings saving homes and some have reached out to them by handing out hot dogs and sodas to firefighters working around their homes.

“It’s truly a blessing to have these brave firefighters here,” Srinivas commented during her interview.

Though several of the fires that broke out earlier have been contained, others continue to burn through communities. Given the wind and weather pattern, Office of Emergency Services Director Mark Ghilarducci says that conditions may get worse, but local and federal agencies will be on call throughout the fire season.