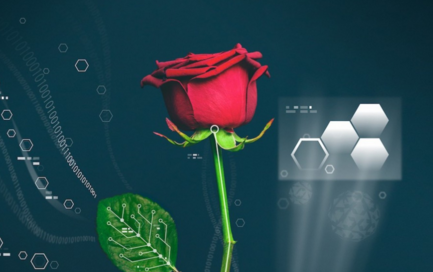 According to a report published on November 20 in the journal Science Advances, a team of researchers at the Laboratory for Organic Electronics at Linköping University in Sweden managed to create living roses with electronic circuits in their vascular systems. They are called “cyborg roses” because miniscule electronic polymers were inserted into living roses; the polymers then self-assembled along the roses’ internal structures.

“In a sense, the plant is helping to organize the electronic devices,” study co-author Magnus Berggren said, according to CNET.

Discovery News reports that the team has been trying to make electronic plants for nearly a decade. It aims to make it possible for the “cyborg” roses to tell flowers when to bloom to avoid an impending frost, or when to put out hormones to withstand a drought, according to the Christian Science Monitor.

The researchers are testing the technology on rose bushes because rose bushes have all the elements of a tree, such as bark, leaves, petioles (stalks that connect leaves to the plant’s stem), and a distinctive root system. Researchers flood these root systems with synthetic polymers, and the roses are able to take in the polymers through their stems as they do with water. Once inside the roses, the polymers assemble themselves into conductive wires up to 10 centimeters long.

Students interviewed for this article were amazed by the roses.

“I always thought of cyborg humans or machines, but I never thought that cyborg plants may be created,” Hollywood High School junior Katie Chiou said to JSR. “It’s pretty amazing how much science has developed.”

Junior Se Rin Lee thinks the idea of a cyborg rose is innovative.

“I think it was an amazing idea to develop a cyborg rose,” Lee said to JSR. “It will be especially helpful to our ecosystem because it will be able to warn and, therefore, save many other plants.”