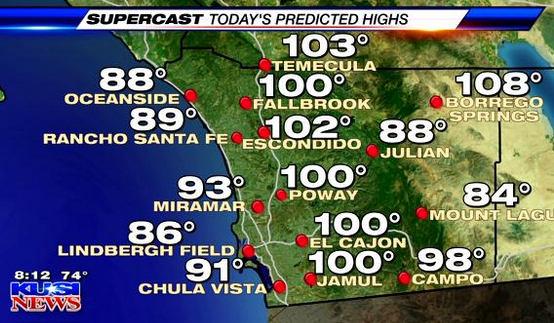 A recent heat wave caused by the rise in humidity and pressure levels significantly impacted the communities of San Diego. The National Weather Service issued warnings to San Diego and its surrounding areas along the border of Mexico, where temperatures were over 100 degrees.

“Abnormally hot temperatures can be stressful to animals and humans, making it hard for the body to acclimate and remain hydrated,” says the Weather Service. “Without precautions even healthy adults could experience heat stress and illness.”

According to a statement from the Los Angeles County Department of Public Health, “When temperatures are high, even a few hours of exertion may cause severe dehydration, heat cramps, heat exhaustion, and heat stroke.”

Haley Gamboa, a senior attending Scripps Ranch High School, recollects an instance when a fellow classmate passed out in class during a heat wave.

“We were sitting in class during freshman year, and my friend completely passed out,” said Gamboa in a conversation with JSR. “Learning cannot be achieved in temperatures like this. It’s just not feasible.”

Mary Kim, a senior at Scripps Ranch High School, spoke to JSR about the district shortening school days in order to ensure the safety of students. “It’s great that they’re doing that for the sake of the students,” she said.

Fortunately, the excessive temperatures have largely abated in San Diego and elsewhere.