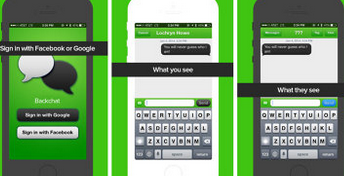 Daniel Singer, a freshman at Harvard-Westlake school, has created two Internet tools that have been gaining attention this year.

Youtell is a website that lets friends and co-workers on Facebook give each other advice and opinions anonymously. Backchat is an anonymous messaging application for smartphones that gives clues about the sender so the receiver is engaged in a fun mystery to find who sent the message. After Youtell’s success, Backchat was made possible by the $200,000 fund from an investment company, Arpex Capital.

“We are unique because we are one of the few anonymous platforms that helps make social communication fun, new, interesting, and genuine again, ” Singer expressed in an interview with J Student Reporters.

Singer was inspired to start making these programs because he had a passion for technology and an interest in anonymous communication.

“Back in 2011, I noticed that there was some trouble with the way people interact socially online. There is a lot of pressure on what you post because everyone can see your posts. This really limits social expression because you have to filter your thoughts to conform to the norm,” Singer explained.

“That is why I turned to anonymity,” he continued, “which allows you to truly express yourself and give honest opinions. It is a more genuine representation of what you are trying to communicate.”

“Bullying does not happen,” Singer said, “because it is a one-on-one conversation. Bullying is more where a crowd picks on one person. We haven’t gotten any complaints or issues about bullying.”

Singer has been featured in publications such as Business Insider and the Los Angeles Times. Youtell currently has over 3 million users and Backchat has over 125,000 users. Backchat has four out of five stars on Google Play and reviews have shown that many people enjoy the app. His company, consisting of his dad and five other people, hopes to expand both programs.

Singer hope to further influence people with his business and says he had “two words” for people who want to start their own business: “Don’t wait. Don’t make excuses. If you keep persevering, you will find your path and place soon.”