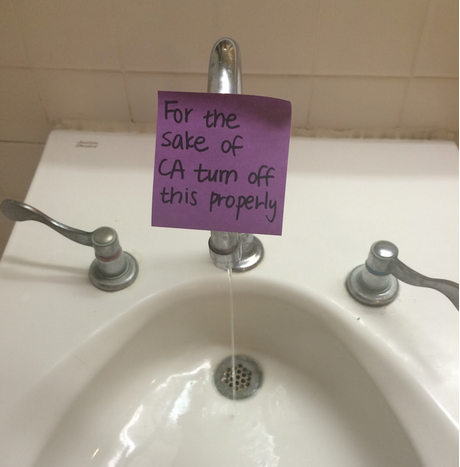 The drought that has affected California since 2011 is having an influence on students at the Stevenson School in Pebble Beach.

According to the US Drought Monitor, the state is facing the worst drought since tracking began in 2000. Residents’ fears have increased dramatically since an LA Times editorial written by Jay Famiglietti, the senior water scientist at NASA’s Jet Propulsion Laboratory, stated that California would run out of water reserves in a year. Governor Jerry Brown has declared an emergency and signed legislation to fund $1 billion to attack the drought, and on April 1 he issued orders for municipal water usage to be cut by 25% throughout the state.

It is clear that the drought has impacted the ways students think and act, causing them to be more alert and mindful of their water use. Students strive to change even small habits to help save water and find ways to contribute to averting a horrible disaster in the future.

Boarding junior Matisse Melendres told JSR, “…At the beginning of the year some of my dorm parents brought up the drought and I was really worried that we would run out of water in the future. It still worries me with all the news coverage about how situations are getting worse.”

Lia Lewine, a junior, had a similar experience.

“It is definitely devastating to hear news about how bad the drought is in California,” she told JSR. “The drought has made me feel bad about taking long showers, and sometimes it makes me wonder about what I could do to conserve water. For example, I close the faucet when I brush my teeth and I take shorter showers. Hopefully these small habits can help conserve water.”

Andy Ki, a junior, told JSR about the spirit of conservation at the school.

“In the boarding school community, I have been exposed to a collective energy towards water conservation and environmentalism in general,” said Ki. “Not only the fundamental placement of recycling bins, but also the constant reminders of shower times have [contributed to the community’s efforts] towards the movement for conservation.”

Yet Ki expressed skepticism about the effectiveness of the water conservation policies enacted by the state before Brown’s April 1 announcement.

“I believe that if legislators had brought stricter rules besides the mere car wash laws regarding time slots or restrictions on watering the lawn, it would help conserve the water source,” Ki stated. “We simply need more drastic measures to conserve water [than those that have been proposed by the government].”