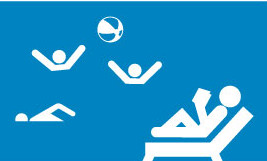 Summer always starts off with a bland water-safety tweet by the Red Cross that gets “retweeted” a few dozen times, only to be countered by an explosion of pictures featuring scantily-dressed teens at the beach posted on social networking sites. Especially on the West Coast, where temperatures are high throughout summer, families and friends often seek respite from the intense heat at local beaches.

Regardless of the sparkling seduction of the summertime sea, citizens should be constantly mindful of the danger posed by drowning.

According to the Centers for Disease Control and Prevention (CDC), it is the second leading cause of death in children. Furthermore, the World Health Organization (WHO) reports that drowning is the third leading cause of unintentional injury-related death worldwide.

“It only takes a second for a child to drown. It is very important that parents never leave their child unsupervised no matter how deep the water,” said Red Cross water safety program representative Marta Gorski to the Canada Health Services.

“One inch of water,” she cautioned, “is enough to cover a child’s mouth and nose.”

Indubitably, grim reminders of this dilemma are presented to the public through information online such as the aforementioned statistics, as well as regular news updates about drowning victims. While families of the victims painfully deal with the unnecessary and preventable death, the public is generally unprepared to respond to dangers.

In fact, in May of this year the American Red Cross found that only 56 percent of Americans can perform the five core swimming skills: jumping or stepping into water over one’s head, returning to the surface to tread water or float for one minute, circling around and identifying an exit, swimming 25 yards to that point and exiting the water. Most respondents to the Red Cross survey also admitted that they are not aware of the Instinctive Drowning Response, an involuntary physiological reaction of drowning victims that occurs when they do not have the oxygen necessary to yell for help or wave their arms.

Describing this response, YMCA Swim coach Chris Kong said, “There is little to no splashing, no waving, and definitely no yelling for help [in the last 20-60 seconds before someone drowns].”

If readers are surprised, then that’s another indication that we all need to do more to learn about water safety precautions. A seemingly obvious bit of advice, but one that the statistics show is ignored by many, is to learn how to swim before swimming. Learning basic swimming skills as a child can help reduce the risk of drowning by 88 percent.

In order to help distressed swimmers, Cardiopulmonary resuscitation (CPR) is also highly recommended and can be learned in a few hours.

Ashley Min, a senior attending Crescenta Valley High School, told JSR, “There are classes offered at our school such as Water Safety, Lifeguarding, and Emergency Medical Response (EMR). You can learn how to handle CPR and even how to handle oxygen tanks in these classes.”