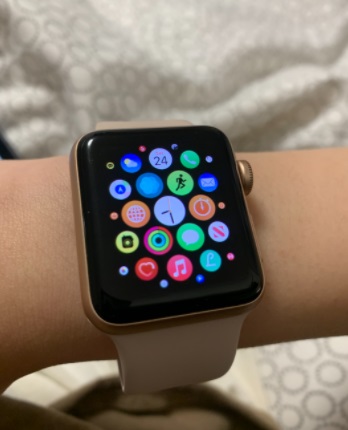 I first bought my Apple watch after graduating from the sixth grade. But never did I know that the small device would be as useful as it currently is.

To be honest, I didn’t wear my watch for four years. Not because it wasn’t useful, but because I couldn’t wear it during some of my classes. Taking it on and off bothered me, and I realized it wasn’t worth wearing it during school days, allowing me to completely forget about my watch. But, the summer of 2021 came, and I started to exercise and go to the gym daily, which meant it was time to bring back the Apple watch.

I knew my watch still had my favorite application: Fitness ? tracking all my workouts and amounts of calories burned. June was when I started wearing the watch again, and it was one of the best choices I made. I always record the activities I do, whether it is yoga or spending time on the elliptical. Each tracking presents a stopwatch, active calories, total calories, and heart rate on the screen. Before the workout starts, the application always does a countdown of “3… 2… 1….”, letting the wearer be fully prepared. However, there are times when I forget to record, and I can rely on my apple watch to let me know as it vibrates while I work out.

In addition to the fitness application, there is a sleep feature that also tracks the bedtime hours and wakes you up. At first, I was nervous to use my Apple watch as an alarm, but it was shocking to hear that the sound was as loud as my iPhone. Fifteen minutes before my sleeping time arrived, a notification on my phone would pop up to alert me. But, I don’t always have my phone near me, so sometimes I would lose track of time. With my Apple watch, this was not the case, however. I would immediately receive the notifications right on my wrist. Having an Apple watch truly helped fix my sleeping schedule, as I would sleep on time and wake up on time as well.

Even if it is not working out or sleeping, I now have my Apple watch on during the day. Wearing it tracks my daily steps and reminds me to drink water, which is very important especially during the hot summer in Los Angeles!