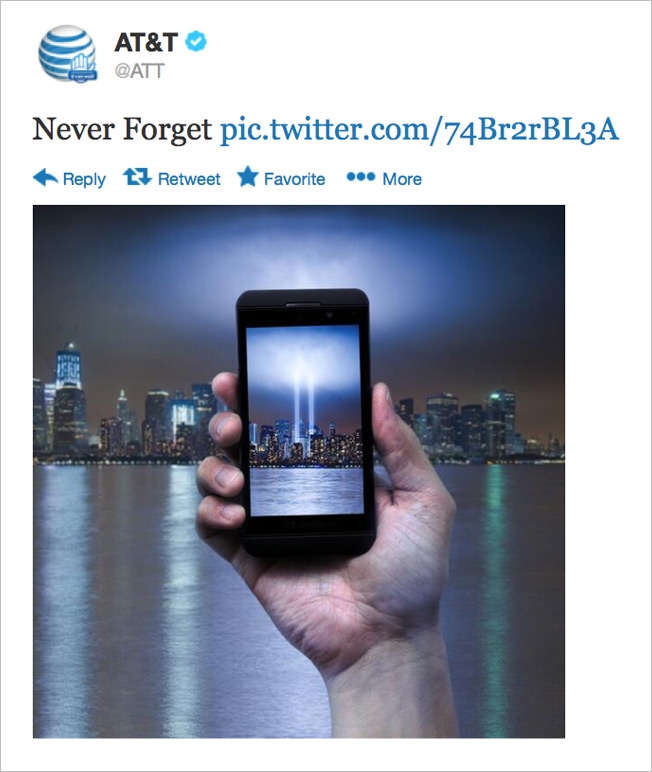 AT&T shocked its Twitter followers and garnered backlash with a September 11 tweet that Buzzfeed dubbed “the tackiest 9/11 memorial on the Internet.” Though many famous companies tweeted in honor of 9/11’s twelfth anniversary, AT&T made news by tweeting an image of the 9/11 Memorial Tribute in Light seen through a smartphone screen with the caption “Never Forget.”

Bernice Lin, a Whitney High School sophomore and AT&T user, stated that the tweet affected her opinion of the company, “It’s not right to post a tweet like that under the excuse of showing respect. They could have used a different way to show respect for 9/11.”

The criticism from the public escalated and AT&T took down the post and apologized  after one hour.

In the apologetic tweet, they wrote, “We apologize to anyone who felt our post was in poor taste. The image was solely meant to pay respect to those affected by the 9/11 tragedy.”

On September 12, journalist Nick Roll wrote in The Lantern, “…AT&T stepped way out of the line by placing a phone on its commemorative picture-because the picture is supposed to be just that, commemorative. How much can AT&T honor the victims of 9/11 if it was simultaneously trying to advertise its product?”

The 9/11 attacks remain a sensitive topic, so many who believed that the wireless carrier used the event to advertise were upset. Critics who saw the tweet saw it as insensitive and disrespectful to the survivors and people who sacrificed their lives on 9/11.

Twelve years have passed since the attacks on the World Trade Center, but being insensitive to the September 11 attacks will never be acceptable. For AT&T, commemorating 9/11 on social media was not a good idea.