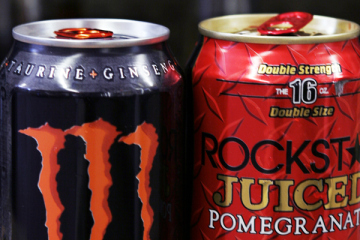 Red Bull, a drink that combats sleep deprivation, is ever popular. Yet an 8.3 ounce can of the beverage is filled with sugar, caffeine and other substances that may be harmful in excess.

The energy drink industry, which includes Red Bull as well as drinks like Monster and Rockstar, is doing a booming business with young adults. In 2003, the journal Pediatrics reported that 16 percent of teens regularly consumed energy drinks. Only five years later, the numbers had jumped to 35 percent and were continuing to increase. According to Beverage Digest, energy drink sales rose by almost 17 percent in 2011.

As consumption has increased, so too has the number of hospital cases related to energy drinks. According to the Substance Abuse and Mental Health Services Administration, between 2007 and 2011 there were 21,000 hospital visits associated with the beverages.

“Energy drinks can increase your heart rate and possibly cause a heart arrhythmia,” says Dr. Sandra Chu Damian, who has a family practice in Harbor City. “I do not condone these drinks.”

Cardiac arrests have also been connected to these energy drinks. Although more research is needed, many scientists believe there is too much caffeine in the drinks. Excessive caffeine has been linked to blood pressure, premature birth and even sudden death.

Despite the risks, many students still consume these drinks.

“Without Red Bull,” said local student Allen Li in an interview, “I wouldn’t be able to finish homework on time.”

Students can consume these products in moderation, but it is important not to replace the need for sleep with these beverages. For some students, the best thing may be to avoid them altogether.

Soolgi Hong is a junior at Palos Verdes Peninsula High School. She recently became interested in the field of journalism and joined the Joongang Student Reporter team this year. She hopes to pursue a career in humanities.