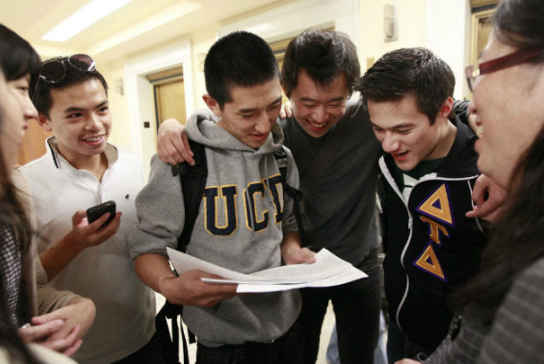 Affirmative action and the concept of the “model minority” both play roles in the acceptance of Asian-American students to public universities, like the University of California schools, as well as private institutions.

Affirmative action refers to positive discrimination meant to help benefit groups of people, such as racial and ethnic minorities, that have been traditionally underrepresented. Some people disapprove of its incorporation in college admissions, arguing that acceptance should occur on the basis of merit, not race or ethnicity.

Not long ago, Asians were a minority in American schools. However, Asian Americans are now the ethnicity with the largest percentage of people in the University of California system, followed by whites. This is one of the reasons why Asian Americans are often described as being a “model minority” – a minority race or ethnicity that is stereotyped as having a higher success rate than other minority groups in terms of both education and income.

In interviews in separate parts of the nation, students reported either stereotyping Asian Americans or feeling the impact of model minority stereotyping.

Max Fernandez, a freshman within the top fifth percentile of students at Tappan Zee High School in New York, explained that Asian Americans are often viewed as being “unfairly” smart.

“Whenever the teachers are returning our papers, the Asians in my class always beat me, and it seems so unfair.”

Ning Hsu, a senior double majoring in international studies and business economics and minoring in business administration at University of California Irvine (UCI) spoke to JSR about his experience with academic prejudice.

“I have definitely experienced the model minority driven prejudice,” Hsu said. “A lot of my classmates thought that because I am Asian, I was good at math and expected me to be getting A’s in the class… I have always struggled with math since High School but my classmates never believed me, thinking I was the ‘typical Asian,’” Hsu said.

There is also a perception that Asians excel at music and art.

Stefano Maliverno, a freshman who is the second chair in the advanced band at Tappan Zee High School, explains, “Although I practice upwards of three hours a day, I can never seem to beat the first chair saxophonist, who is Asian. He doesn’t even practice, and yet is still better than me. Plus, 90% of the band is Asian, so I wonder if music and Asians are related or something.”

Does The Stereotype Impact Admissions?

Students bear heavy responsibilities during the four years they spend in high school, and their time in high school is a major factor in determining what they will do in college and in their careers. As a result, many Asian Americans worry that high academic expectations placed upon them could negatively impact their admission chances and put them at a disadvantage in decisions wherein affirmative action is a factor.

According to Willie Lo, a current sophomore at Rice University, there is a disadvantage in the college admission process for Asian Americans. “An Asian would have it harder because so many of them are high-achieving. Asians get into the top schools and achieve high GPAs and SAT scores, so they really set the bar.”

Hsu, at UCI, concurred, saying “I do believe in some ways the affirmative action has put me at a disadvantage compared to student applicants of other races.”

Yet not every student shared the same experience. One interviewee, who asked to keep her name confidential, expressed the opposite view. “[Affirmative Action] may have played a role when I was accepted into graduate school at Teacher’s College at Columbia University,” she said in an interview with JSR, “because they value diversity. The Asian population is relatively small at the university.”

Though its impact on individual students may differ, several high schoolers contacted by JSR expressed concern that affirmative action is having a deleterious impact on society itself.

Canyon Crest Academy junior Patrick Lin said, “[Affirmative action] clearly recognizes racial divides and supports those who are in races thought to be ‘less superior.’ Thus, in a form of inverse racism, it… not only enhances the model minority idea by clearly marking out who is not a part of the model minority [but] it also creates new racial rifts and deepens stereotypes and prejudice.”

“I disagree with the policy of favoring only based on… race,” he said, “and believe this should instead be based on socioeconomic status.”

Other Programs Focus on Economic Inequality

Though affirmative action will remain a contentious issue, there are several programs that aim to increase educational equality on a basis that isn’t related to ethnicity.

The Questbridge College Match Program is one program designed to bridge the nation’s best universities with low-income students by offering them a full-ride to a college of their choice. It is not racially-based, but rather related strictly to socio-economic status.

Willie Lo was one of the 3,850 high school students selected as finalists for the 2012 Questbridge College Match Program.

“These programs are admitting people on a completely different basis—income,” said Lo of Questbridge and programs like it. “If your family can’t afford your college education, it doesn’t matter if you’re Asian, white, or black; Questbridge aims to give you that full ride.”

Through the Questbridge College Match Program, students can apply to 35 Questbridge partner colleges and be selected for admission and full four-year scholarships. The application that opens in August is free of charge and students are required to submit a transcript, test score reports, three letters of recommendation, and several essays. 29% of the finalists in 2012 were Asian Americans with Whites and Hispanics just ahead making up 47% and 30% of finalists, respectively.

“I don’t think the program necessarily boosted my chances of getting into a good college,” Lo stated. “You get in wherever you qualify academically. Questbridge just attempts to give low-income students the opportunity to apply to the top colleges without the burden of the extra application fees and financial forms… It’s only impacted me positively and I’m so happy that I was matched to Rice.”