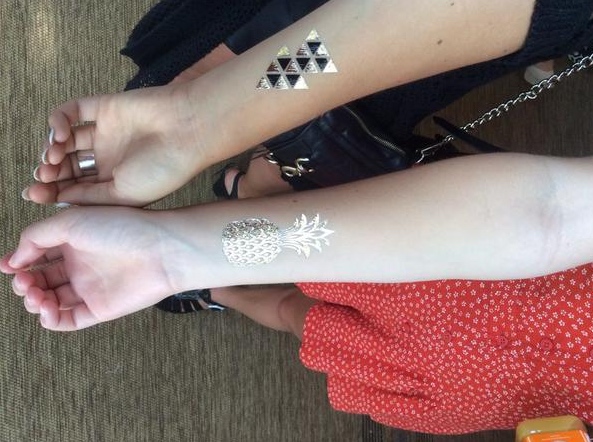 Temporary metallic tattoos, commonly known as “flash tattoos,” have been gaining popularity among teenage girls. These tattoos, which replicate jewelry from high-end brands such as Cartier and Saint Laurent, create the illusion that the wearers are wearing jewelry.

These non-toxic tattoos last for four to six days and come in sets that are around $20 to $30 each. The most famous company that provides these tattoos is Flash Tattoo, which is where the goods get their generalized name, but there are many other companies that make these metallic tattoos such as Lulu DK. They can be found in stores such as LF, Kitson, and Planet Blue.

Flash tattoos have been extremely popular among concert goers and have been seen on celebrities like Beyoncé and Khloe Kardashian and in countless Instagram posts.

Sabrina de Brito, a sophomore at Harvard-Westlake said, “They’re really eye-catching because they’re so shiny. I don’t know why they’re so popular now, but flash tattoos are pretty cool. It’s funny, I came back from summer break and suddenly everyone had these gold flash tattoos all over their bodies. I guess it’s just a fad.”

However, some have not seen these tattoos as positively as others have. Kami Durairaj, a sophomore at Harvard-Westlake said, “While these are trendy, I think they can be annoying and distracting especially when people wear them to school. [They don’t] give off a good image.”