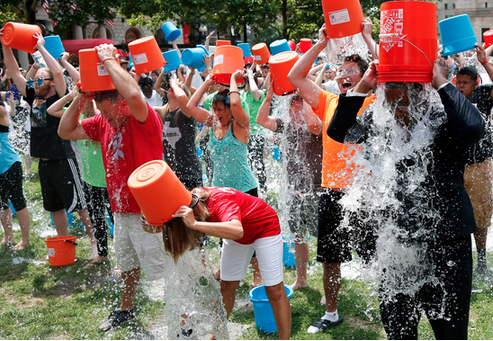 The Strike Out ALS Ice Bucket Challenge is a chain-reaction challenge in which the participant throws a bucket of iced water on themselves and challenges three others to either do the same within 24 hours or donate $100 dollars to go toward ALS research. It is the latest pop-up trend circulated through social media that has gone viral, raising over $31.5 million dollars from July 29 through August 20 for the under-researched disease.

Amyotrophic lateral sclerosis (ALS) is a neurodegenerative disease that is one of the most underfunded diseases because, with only a little over 5,600 people are diagnosed with ALS each year, finding a cure for it is not likely to be profitable for drug companies. Yet, thanks to the added endorsement by big name celebrities such as Bill Gates, Oprah Winfrey, and Lebron James, the trend raised far more money in one month for the ALS Association than the $1.9 million raised in the same time period in 2013.

“Internet activism has become an undeniably powerful strain of activism. When an instance of it singlehandedly increases the donation yield toward a charity by 31,900%, it’s hard to not give it credit,” said Beckman senior Kevin Chu when asked by JSR about the ASL challenge.

“The great relief for many,” Chu said, “is that people are now talking about a disease that hadn’t been the sort of thing to get airtime.”

But some are doubting that this fervent interest will last.

The ALS ice bucket challenge can be seen as the latest in a long list of causes given brief, but massive publicity through the power of social media and “internet activism.” Before the watery viral trend, there were similar campaigns for change propagated through the internet such as: the #BringBackOurGirls trend, referring to the April abduction of 276 Nigerian girls by terrorist group Boko Haram, and the #Kony2012 campaign which raised money to spread awareness of militia leader and war criminal Joseph Kony.

The problem with these past campaigns, however, is that they flared up for a short amount of time and then died back down just as quickly as they came up. The Stop Joseph Kony movement was shared over 11 million times and gained over 100 million views, but as luster and interest washed away, so did all the Facebook statuses and Twitter updates about it. As for Boko Haram, the movement calling for the return of the Nigerian schoolgirls was not even reinvigorated after the Nigerian government officially ended their investigation with over 200 girls still missing.

Even now, there is evidence that that is the kind of ending the ALS Ice Bucket Challenge will experience. Indeed, many of the uploaded videos do not even mention ALS once, nor do they provide links for the ALS Association’s website or other sites where viewers can educate themselves about the disease.

“I think internet activism is actually extremely effective because certainly a lot more people are exposed to social media than to the news,” said Beckman student Melinda Nguyen. “But then again, a lot of people are just doing the challenge for fun, not really to raise awareness or anything.”

“This is the part where we have to be careful when stepping into internet activism in general. [We must ask,] ‘am I liking a status, reblogging a post, or posting a video just for the sake of projecting an inflated sense of my own magnanimity or will I conscientiously strive to mindfully change my behavior away from the screen?’” stated Chu.

“Activism goes well beyond education,” Chu concluded, “but education is a powerful start.”

It is no question that ALS victims has benefitted from the massive publicity the disease received in a short amount of time. But the $31.5 million dollars is only the start; even more money can be raised if every participant in the Ice Bucket Challenge donates even one dollar. Much more can be achieved from these pop-up trends if everyone makes a conscious effort to keep the original cause in mind.