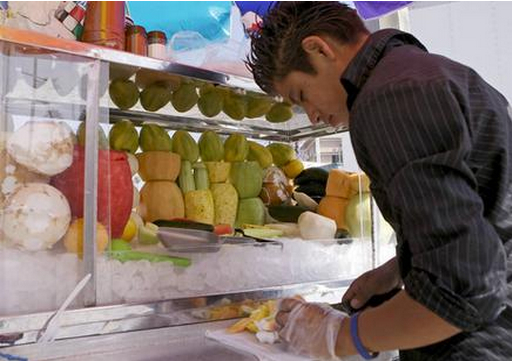 The proposed restrictions would block vending in public parks unless the seller has city permit to do so and aim to block the illegal growth of the unlicensed street vending industry. Under the restrictions, repeat offenders can face misdemeanor charges.

Advocates feel that these restrictions are necessary because of the situations arising in public parks.

According to Kevin Regan, assistant general manager of the parks department, unpermitted street vending is creating problems in public parks. As reported in the LA Times, Regan told a City Council committee meeting on September 22 that, at the annual Lotus Festival at Echo Park Lake, unapproved vendors undercut the permitted sellers’ prices by setting up shop next to sellers who pay $1000 fees for their permits. Regan also said that illegal pony rides were offered at Hansen Dam.

Without these restrictions, the police are unable to stop unlicensed vending.

Los Angeles Center for Enriched Studies sophomore Jamie Chung, interviewed by JSR, believes that some restrictions should be created.

“I don’t think it is fair that some sellers who actually pay to sell at a place have to compete with illegal street vendors who sell for free. I do think that such restrictions should be [put into place],” Chung said.

However, others believe that the restrictions may hurt the community. Mike Dennis, director of organizing at East Los Angeles Community Corporation, argued at the committee meeting against the restrictions because of their punishing effect on poor residents.

“You’re generally going to see a single mother… that earns about $12,000 a year. And those are the kinds of people that are going to suffer from this,” Dennis told the committee.

In an interview with JSR, street vendor Jose Barrios said that he feels that the restrictions are unfair.

“Other people may shame this [job],” Barrios said. “But this is the only way I can earn money, and I don’t think these restrictions are reasonable for people like me.”

The community has mixed reactions about the impending restrictions.

“Also,” she added, “I am used to seeing street vendors around my neighborhood and I do not think they cause any harm.”

At the September 22 meeting, the panel of councilmembers voted 3-2 to send the measure to the full council.