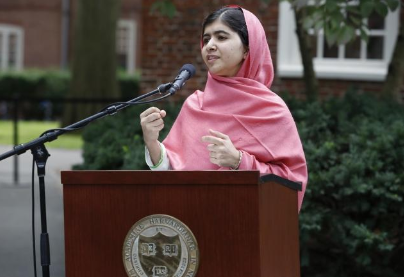 When she was 12, Malala Yousafzai was championing the right of girls to get an education.

Yousafzai grew up in the Taliban-controlled Swat Valley in northwestern Pakistan, where schools are often torched, demolished, or ransacked. Her father, Ziauddin Yousafzai, was targeted for death for supporting girls’ education and running a girls’ school in the valley.

Although the local Taliban leader banned education for girls in January 2009, Yousafzai continued to attend school. Around the same time, at 11, she began anonymously blogging for British Broadcasting Corporation’s BBC Urdu website.

Her blog, “Diary of a Pakistani Schoolgirl,” depicted her life under Taliban rule. As her fame grew both locally and internationally, two Taliban gunmen boarded her school bus and shot her in the head and neck on Oct. 9, 2012. She was airlifted from a Pakistani hospital to Birmingham, England, where she made a full recovery and now resides.

The shooting propelled her into international renown, and news organizations called it “the Taliban’s shot heard around the world.”

Together with journalist Christina Lamb, she published her memoir, “I Am Malala,” released in 2013. Yousafzai’s fame was further highlighted by her tour around the United States to spread her campaign for girls’ rights to education. Her tour included appearances on The Daily Show, ABC News, BBC, and CNN. She has been using that fame to impact others.

“In countries like India and Pakistan, it is unheard of for women to stand up against a group like the Taliban,” Irvine High School Indo-Pak club co-president and senior Mariam Tariq said in an interview with JSR.

“She’s become an inspiration for me to stand up for my beliefs despite the consequences,” Tariq continued. “She makes us in Indo-Pak proud of our heritage and me, proud to be Pakistani. It’s nice knowing that despite the corruption in the area, we have …people who are fighting for a better country.”