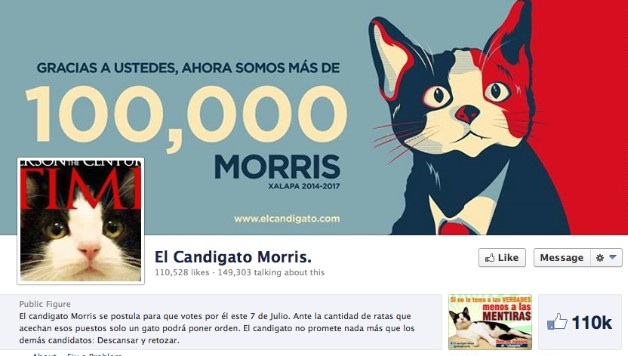 Morris the Cat has attracted thousands of supporters worldwide after putting his hat in the Sunday, July 7 election for mayor of the city of Xalapa in eastern Mexico.

The 10-month old cat was put into the race by owner Sergio Chamorro, an office worker among the millions of voters in Mexico who are disgruntled with the nation’s corrupt political system. Chamorro’s satirical action has prompted others to nominate their domestic animals to run for political office across the nation.

Morris’s campaign is attracting popular attention not through political promises, but by pledging to donate campaign funds to an animal shelter.

Although Morris will not officially appear on the ballots in the upcoming election, voters are encouraged to draw cats on the cards in support of the feline.

“I think it’s really cute that a cat is running for political office,” says Harsimran Brar, a rising freshman at the University of Arizona, “but this is also a tragic indication as to the sheer amount of corruption in the government and the discontent present among Mexicans. It’s a sad joke.”

Xalapa, the capital city of the state of Veracruz, has had its fair share of the violence that has rocked Mexico this past decade. Drug trafficking and corruption in the local government and police force have become major problems there, with no (human) candidate offering a pleasing solution.

“The [Morris] campaign is really trying to use humor to draw attention to a rising problem,” says Mario Cruz, an LA resident. “Personally I think it’d be better if a cat is elected. At least the government will have a harder time participating directly in corruption.”

Mexico still ranks poorly on the global scale in terms of human rights and safety. In a world gone to the dogs, perhaps a vote for a cat is the right choice.