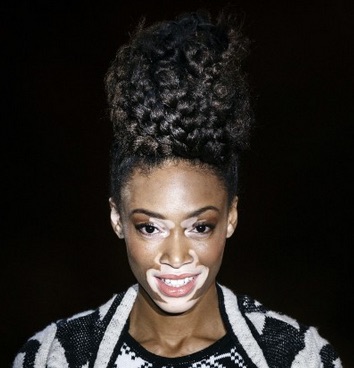 Chantelle Brown-Young, also known as Winnie Harlow, is a big star in the fashion world right now. Diagnosed with vitiligo, the same skin disorder Michael Jackson had, the 20-year-old Canadian model overcame years of bullying and rejection to achieve her dreams of becoming an international model.

When Harlow appeared on “America’s Next Top Model” last August, some audience members were shocked to see a black model with mysterious white patches on her stomach, hands, knees, and face. Her striking appearance caught the attention of the modeling industry; although she didn’t win the show, she was chosen as the face of Barcelona label Disugal and featured at New York Fashion Week. Becoming an international star less than a year from her debut allowed Harlow to become a popular, public, and proud spokeswoman for vitiligo, the disease that causes the patches across her body and affects up to two million Americans.

Fayetteville-Manlius High School sophomore Henry Matthew told JSR about his previous perception of vitiligo, which was informed by his knowledge of Michael Jackson.

Matthew told JSR, “I used to think that [Jackson] got multiple plastic surgeries to make himself completely white. Yes, I was aware that he had a skin disease, but I thought it was just an excuse …to justify his transformation. I had no idea vitiligo was seriously damaging [his] pigmentation!”

Jackson, diagnosed in 1986, was furiously attacked in the media for attempting to bleach his skin and become light-skinned. For more than two decades, the singer continuously used products to even out his skin tone. Many doubted his condition, and it wasn’t until his autopsy proved he had vitiligo that the accusations ceased.

Harlow, however, is taking the opposite approach by embracing vitiligo as a part of her identity and appearance. The stark contrast between Jackson and Harlow’s approaches raises questions about our society. Was it Jackson’s fault that he couldn’t embrace his condition and failed to inform the public about vitiligo, or, has our society progressed during the past 30 years to be more accepting of people with vitiligo?

“Around five weeks ago,” Seers said, “I had no idea …about vitiligo in general, really. I accidently stumbled across Harlow’s Instagram account and followed her because she had more than 700,000 followers. To be honest, I thought her condition was face paint in the beginning!”

Seer continued, “I began to learn about her condition because she posts at least ten posts weekly explaining her condition and how there are so many more vitiligo patients out there. Last week, when she posted her tribute photo of Michael Jackson and mentioned her connection with Jackson because of vitiligo, it clicked. Six years after his death, I realized his change was due to vitiligo.”

Though Harlow’s fame exploded in less than a year, it was earned through sweat and tears. Brought up by a single mom in harsh economic conditions, she was regularly bullied through school due to her skin condition. When she decided to dive into the modeling industry, Harlow was rejected by every modeling agency in Toronto.

Yet, after successfully turning her rare skin condition into a unique characteristic that brought fame and fortune, she is now using the immense attention upon her to reduce discrimination, prejudice, and harassment towards vitiligo patients.