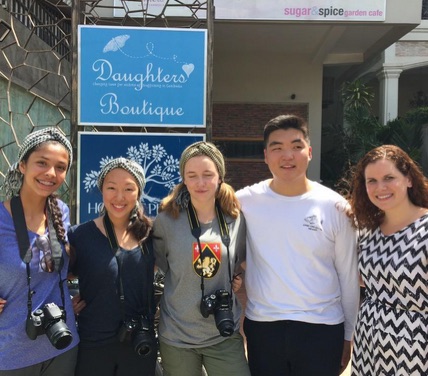 From the comfort of a tour bus, I passed an apartment building.

Located in the heart of Cambodia’s capital city of Phnom Penh and nicknamed the “White Building” despite having walls blackened with grime, this building is one of the most iconic slums in the country. Plants seem to grow from and cling onto cement walls, and laundry lines hang precariously over narrow verandas. The White Building overlooks a street that in daylight is occupied by old women selling noodles and pig’s trotters underneath green parasols; when it nears sunset, young women sitting in plastic folding chairs line the sidewalk and wait for clients.

With an estimated 40,000 to 100,000 workers, the sex industry is rife in Cambodia. It thrives in brothels, karaoke bars, massage parlors, hostess bars, and on streets like the one in front of the White Building. A study released by the United Nations Development Programme in 2008 estimated that 40 percent of Cambodia’s population earns less than $1.25 a day, and sex work appeals particularly to girls and women who stand to make so little elsewhere.

Yet Daughters of Cambodia, a Non-Governmental Organization (NGO) I learned about during a trip that my classmates and I made to Phnom Penh, provides women who were once sex workers with alternative employment options and the training needed to succeed.

There are myriad organizations operating in Cambodia with the purpose of rehabilitating and training victims of sex trafficking and sex exploitation, usually for the garment industry. Yet Cambodia’s garment industry is beleaguered with labor rights abuses and has made headlines with numerous incidents of workers fainting from overwork. Women workers, who predominantly make up the workforce, often experience “forced overtime, pregnancy-based discrimination, and anti-union practices,” according to Human Rights Watch.

Daughters of Cambodia, however, offers former sex workers opportunities outside of the garment industry.

We entered the Sugar ‘n Spice Café, which is run by Daughters of Cambodia, during its lunchtime bustle and sat down at a table with a dozen high school students. Walls painted a pretty blue were adorned with words like “self-esteem” and phrases like “there is hope.” Women who were once sex workers occupy the positions of head chef, sous chef, barista, front-of-house manager, and waitress.

“Daughters of Cambodia is a Cambodian-based nonprofit for women who choose to exit the sex industry. We employ them, train them, and provide medical care so that they can sustain exiting the sex industry while providing for their families,” Breanne Orndorff, the program’s director, said during our visit.

“Daughters has two requirements for our girls: one is that they are currently a sex worker and two is that they themselves want to leave the sex industry,” Orndorff said. “Women can come in for open interviews once a week and if there is room, we hire them… We have two spas, two shops, two cafés, a hotel, and a productions center for screen printing, woodworking, sewing, and jewelry-making. This is also where we provide social work and medical care.”

However, Orndorff explained, “A lot of [the women] can make more in the sex industry than they can with us, so that is of course the temptation that can drive them back.”

This economic pressure is why the women became sex workers, instead of garment workers like many, in the first place. According to a survey by Cambodia Institute of Development Study, a sex worker can earn up to $160 a month, as opposed to a textile and garment factory worker that earns a monthly income between $45 and $80.

Though it cannot compete with sex work in terms of wages, Daughters of Cambodia’s effectiveness is apparent from the low rate of recidivism among its trainees. As of 2015, the percentage of girls that do not re-enter the sex industry after the initial six-month training period with Daughters of Cambodia has been reported at 90%.

An appeal of Daughters of Cambodia is that it provides former sex workers with a support system that empowers them as individuals. Instead of training the women to become dependent on nonprofits, the organization emphasizes that it is an unimposed choice for women to act upon their desire to exit the sex industry. Additionally, women are offered counseling and classes to learn everything from English to health education.

“The girls that get past the initial six-month training period begin to trust us and know that we will support them. They’ll bring their issues to us and we will talk and try to help them through [the issues],” Orndorff said. “The women at Daughters of Cambodia train each other. This is like an apprenticeship program, and that is really beautiful to see.”

In the end, the explanation for Daughters of Cambodia’s trainees’ low recidivism rates is straightforward. It is a community built upon a foundation of personal ties between women sharing a similar past. These women may not be earning as much as they could as sex workers; however, they cannot put a price on the opportunity to change their lives and put karaoke bars, plastic folding chairs, and bills slipped surreptitiously into outreached hands in the past.