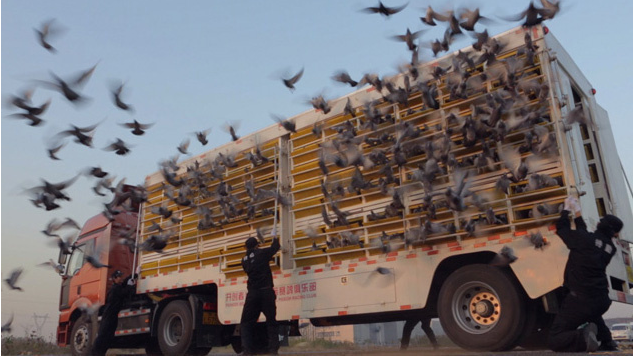 Some say its animal cruelty, while others say it’s a kind of image renewal for the birds that populate busy cities of New York and Los Angeles. Regardless, an unlikely form of betting is currently garnering the interest of a variety of people from the  middle class to the highly extravagant class – pigeon racing.

Having been used for centuries as means of communication during wartime, pigeons have a deep-rooted history of domestication. Although it was not popularized until the 19th century by Belgian hobbyists, the sport dates back nearly 2000 years. Now, people around the globe participate in the pastime.

China, in particular, holds a high position in the pigeon racing community. Recently, a pigeon named Bolt was sold to a Chinese bidder for more than $400,000.

Yet pigeon racing is more than a test of prosperity according to Liu Yung, a “balcony breeder” in China who raises his own pigeons.

“Rich people can afford better things with their money,” Yung explained in an interview with Vice Magazine. “But we have love and passion and a serious attitude.”

In China, the hobby is not particularly controversial. In the US, however, breeders and racers face opposition from advocates for animal rights and states that prohibit betting on the sport.

In April of 2012, People for the Ethical Treatment of Animals (PETA) released a 15-month investigation on American pigeon racing. The report condemned the sport, citing “massive casualties of birds during races and training, …rampant killing of unwanted birds and abusive training” along with evidence of a multimillion dollar illegal gambling industry. The PETA report led to legal action, and the executive director of the American Racing Pigeon Union (AU), Karen Mae Clifton, is currently facing felony gambling charges in the organization’s home state of Oklahoma.

In response, AU has promised to promote more ethical standards and animal care awareness. In a statement, the organization called PETA “ruthless” and described the criminal charges as “unjust.”

Whatever the case, the increased attention on pigeon racing is making the sport seem appealing to some local high school students.

“It’s strange because when we think about pigeons, we don’t immediately relate them to racing,” says Ken Baik, a rising senior at Venice High School. “But I think it’s an interesting mix of gamble and luck. It’s open to anyone and anyone can win.”