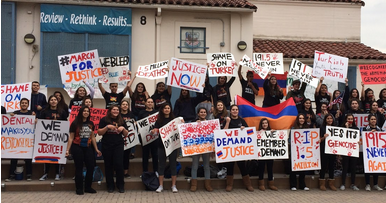 On April 24, Armenian students and their supporters at Crescenta Valley High School (CVHS) joined Armenians throughout the world in protest of Turkey’s non-recognition of the Armenian Genocide.

The Armenian genocide is generally considered to have begun on April 24, 1915, when Ottoman authorities in the capital of Constantinople rounded up more than 200 leaders of the Armenian community who they feared were allied with Russia and fomenting revolution. This was the start of a mass persecution so destructive that by its end in 1918, as many as 1.5 million ethnic Armenians in the Ottoman Empire had died.

Yet the government of Turkey, the political successor to the Ottoman Empire after its collapse following World War I, refuses to recognize this tragic event as a genocide, despite 27 other countries officially recognizing it as such. In fact, the nation fact criminalizes the use of said word in regards to this tragic event.

To make their voices heard, the student participants of the protest put duct tape over their mouths and held signs during both the school’s snack and lunch periods where most of the student body could see them.

Niko Milanian, a sophomore at CVHS, thought that the protest “was a nice gesture” but felt as if those participating “could have done something more than just stand there and hold signs….that would really engage people in a discussion about the severity of Turkey’s denial.”

Deena Gharibian, a sophomore who participated in the protest,believed wholeheartedly in the protest’s way of communicating dissent, believing that “us taping our mouths shut really drove home the point that for 100 years the victims of the Armenian genocide could not themselves protest Turkey’s denial….and thus it was up to us people in this generation to continue on the struggle for recognition and acceptance.”