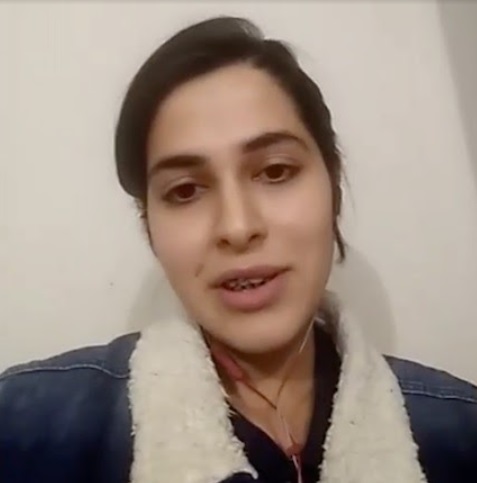 Singing is a natural form of human expression, a channel by which we can vent out our deep inner emotions. For some, however, this innate urge is forbidden. A youth volunteering organization, Life Reset Foundation, held an online forum in January, 2021, with Sedighe Salehi (Sedi), a former refugee camp resident in Moria Camp, on Lesbos Island in Greece. Sedi shared her painful experience growing up in Iran as a Muslim, and her struggles in the refugee camp.

Gifted in singing, Sedi always aspired to be a singer, but her society systematically prohibits women to sing in public under the Islamic law. From an early age, she learned to accept this harsh reality and had to abandon her aspirations even before blossoming. The title “a good girl” is reserved for someone who limits herself to domestic labor with no need of education or self-adornment with cosmetics or jewelry. Restrictions on women stretch beyond domestic affairs. Their rights are strictly curtailed in social status, with no legal rights on engagement, marriage, or custody over children in the case of divorce. Women’s secondary status was contrasted to men’s status as Sedi put, “Men have rights to get married up to four times permanently, and thousands of times temporarily.”

Fleeing cultural oppression and economic devastation, Sedi landed in Moria Camp, the largest refugee camp in Europe, located in the Greek island of Lesbos, hoping for a better life. The camp meant to accommodate 3000 people was holding around 22,000; a place supposedly a haven for the oppressed had become a place of deprivation, violence, and despair. During the summer, the tents were so unbearably hot that the refugees had to go to the beach, which was a two hour walk away.

An overflow site, Kara Tepe Refugee Camp, has replaced Moria Camp, and yet there is still not enough space to accommodate all arrivals. When Moria burnt down, everyone cheered “no more Moria Camp,” but conditions in the new camp were far from what everyone expected.

Caught between a rock and a hard place, our fellow human beings on the other side of the globe are living daily with feelings of abandonment and hopelessness. While many tend to complain over trivial things, Sedi’s first hand experience, shared to a group of high school students, was palpable, leaving us speechless.