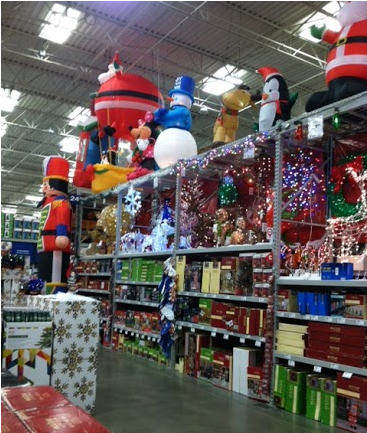 Christmas is only one day a year, yet it has come to dominate the fall season. Almost two months before the actual holiday, businesses such as retailer stores and radio channels are encouraging the Christmas spirit through advertisements and products.

This marketing phenomenon, known as “the Christmas creep,” begins the holiday season months in advance in order to extend the time period in which consumers can purchase holiday merchandise. This way, retailers can exploit the commercial benefits of Christmas for longer and gain more profit.

In addition to being a fun holiday to spread love and festive spirit, Christmas is also an economic opportunity for businesses. Stores take advantage of the holiday gift shopping tradition by offering enticing discounts and sales on desirable items and profiting from Christmas decorations such as trees, light fixtures, and figures.

Though the Christmas season has long been beginning around Thanksgiving, in recent years the Christmas creep has been coming even earlier to allow consumers to shop for Christmas supplies as they are shopping for Halloween costumes or pumpkins. Television and radio have also encouraged the holiday spirit through marathons of Christmas shows and songs.

Although this is beneficial for businesses, many people disapprove of the early festivities.

Jana Obusan, a sophomore at Valencia High School (VHS), told JSR, “I don’t even understand why they do this, honestly.”

“I don’t really think it’s beneficial for businesses,” Obusan said, “because people are going to buy Christmas decorations at some point in the year, anyway.”

Christmas has been a widely loved holiday in America, but it has also overshadowed other holidays such as Thanksgiving, according to British magazine The Observer. People can be too focused on one holiday to fully appreciate another.

“It’s a bit ridiculous how businesses prep for holidays months away, expecting people to buy their products. I just don’t feel the holiday spirit until it’s actually the month of the holiday,” said VHS sophomore Alissa Kim in an interview with JSR.

However, extending the holiday season has not been entirely negative. It can reduce the hectic traffic that accompanies the days before the actual holiday, and holiday discounts can be beneficial for consumers who desire pricey products. There are also people who genuinely enjoy the widening of Christmas and its festivities.

“I like it when shops decorate early for Christmas or any holiday in general. I like the idea of a holiday kind of having its own season because I think it gets people more excited for the actual day,” said Chloe Riley, a junior at VHS, in an interview with JSR.