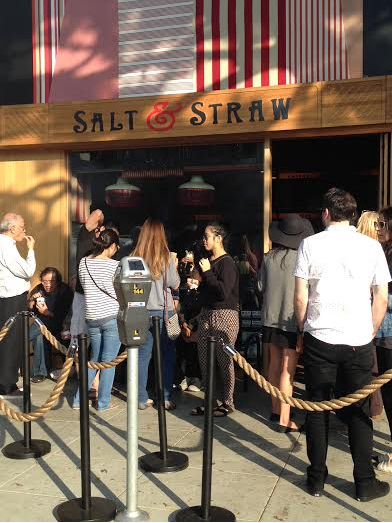 The newly opened ice cream shop Salt and Straw has been gaining attention in Los Angeles after opening this fall in Hancock Park’s Larchmont Village. It is the first Salt and Straw store outside of Portland, Oregon.

Based in Portland, the company was created by cousins Kim and Tyler Malek in 2011. According to its website, “[Salt and Straw’s] ice cream is handmade in small batches using all natural dairy with the best local ingredients our communities have to offer, as well as imported flavors from hand picked farms and producers around the world.”

From young children to grandparents, many have fallen in love with Salt and Straw due to unique flavors including Avocado and Strawberry Sherbet, Black Olive Brittle and Goat Cheese, and Toasted Coconut with Candied Macadamia Nuts.

The store also has seasonal flavors, including Salted Caramel Thanksgiving Turkey and Cranberry Walnut Stuffing, which are surprisingly not bad. When I tried them, they did not overpower me with the taste of turkey and stuffing.

As the flavors are all so unique, the store allows customers to sample as many flavors they want. The first time I went there, the worker gave me samples of the most popular flavors when I asked him for recommendations. I ultimately decided on the Chocolate Gooey Brownie, and it was amazing. I tried the Sea Salt with Caramel Ribbons and Almond Brittle with Salted Ganache, which were equally rich and delicious, the next few times I went.

Salt and Straw seems to beat out the other ice cream shops on Larchmont Village, and every time I’ve visited there has been at least a five-to-ten minute wait.

“I wish the store was bigger, considering how many people were waiting in line to buy ice cream,” said Michelle Seung, a freshman at Harvard Westlake who has also visited the store.

The reason that I am willing to wait long lines for ice cream at Salt and Straw is because I can’t get the same ice cream elsewhere. The flavors are truly one-of-a-kind, and that makes me come back for more. The price of their ice cream is slightly more expensive than other ice cream places, but I think it’s worth paying a little more for better quality ice cream.

“I tried the Salted, Malted, Chocolate Chip Cookie Dough flavor and it was delicious because of its creaminess and richness. The customer service was friendly and they were nice about letting us try different samples,” commented Seung.

Salt and Straw only has four stores in the United States, but it also sells its ice cream at shop.saltandstraw.com and ships it to people who are not close to the stores.