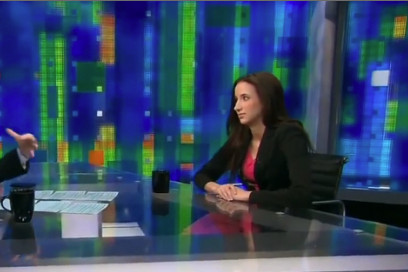 Belle Knox, a Duke University student who made national news when she revealed to the world that she was pursuing a career as a pornographic actress to pay for school, shocked media when she spoke out in her own defense and of how pornography empowered her as a woman.

Knox, a women’s studies and sociology major at Duke, told media, “For me, shooting pornography brings me unimaginable joy. When I finish a scene, I know that I have done so and completed an honest day’s work. It is my artistic outlet: my joy, my happiness, my home.”

Knox spoke with Piers Morgan on CNN where and contended that pornoography was a liberating experience in a society so reluctant to discuss sexuality and pornography. When asked about whether fellow students treat her any differently, she answered “yes” and noted that some of the girls at her school told her they were uncomfortable with their boyfriends watching her films.

Tasha Reign, who starred in adult films during her time at UCLA, has reached out to Knox through an article on the Huffington Post wherein she expresses support for Knox’s choice to pursue a career that she finds empowering.

Reign wrote, “In an ideal world, you should be able to openly and fearlessly state your stage name, or even your birth name; however, it seems you are not lucky as me to have gone to a school which celebrates your diversity and sexuality… I want to apologize for all the ignorant, fearful comments your schoolmates at Duke are unloading on you.”

In the interview on CNN, Knox stated her belief that society represses individuals are repressed by prohibited from showing their bodies.

Knox said, “I find it extremely hypocritical that the same society that consumes me, condemns me.”

Due to threats and and concerns for her safety, Knox is currently taking time off from college with the support of Duke staff and administration. She shared that being on campus was an “upsetting experience.” Now that she has left campus, Knox says, she is surrounded by people who support her.

Knox’s supporters do not only come from those of her industry. Michelle Lee, a senior at Westview High School, said in an interview with JSR that there is nothing wrong with Knox’s decision.

Lee says, “As long as she… isn’t forced to be in the industry only because of college, I think it’s her choice completely. Men should respect her and students should not think of her any less… [If she] likes what she is doing, no one should tell her not to do something.”

On CNN, Knox told Morgan that the only regret she has is failing to tell her family about her job from the start.