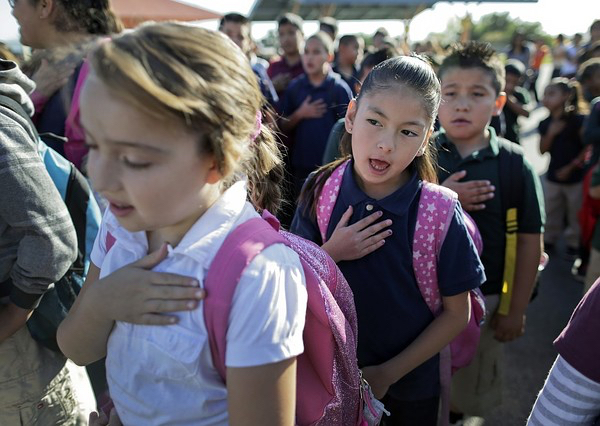 At Oak Park High School in Ventura County, an issue arose concerning the Pledge of Allegiance because the pledge includes the words “one nation under God” and may violate the beliefs and freedoms of atheist students.

After an atheist ninth-grade student refused to stand for the pledge, his teacher loudly disciplined him in front of his fellow classmates. The unidentified student reported the incident online to the American Humanist Association’s Don’t Say the Pledge website, which encourages Americans to “stand up for America by sitting down during the Pledge of Allegiance boycott until the inclusive language is restored.”

The “inclusive language” refers to the original text of the pledge, which has only included the words “under God” since 1954.

In addition to religious objections, there are other issues concerning the pledge. In Texas, a debate arose on social media when a student was given a two-day in-school suspension for refusing to stand for the pledge. Mason Michalec, a sophomore in Needville High School, said he refused to stand due to his opposition to government spying.

In support of the Oak Park student, others have printed a pledge boycott card and showed it to their teachers to remind them of student rights under the constitution, the first amendment of which prohibits “the making of any law respecting an establishment of religion, impeding the free exercise of religion, [and] abridging the freedom of speech.”

In response, the Oak Park Unified School District has decided to reaffirm student rights to refrain from reciting the pledge and has issued a letter addressing teachers who have shown a lack of understanding regarding student rights.

When asked about his stance, Van Nuys High School history teacher Mike Watson told JSR, “Students should stand out of respect for the country. However, I’d prefer not to say it every day because then the pledge becomes a boring chore to accomplish every morning.”

“I think there should be a limit to it. Some kids may take advantage of [optional recitation] and not do it because they’re lazy,” said Angela Park, a sophomore at Van Nuys High School.

“However,” she added, “if that student is very serious about not reciting it, then I think the school should allow them to not do the Pledge of Allegiance because of freedom of speech.”