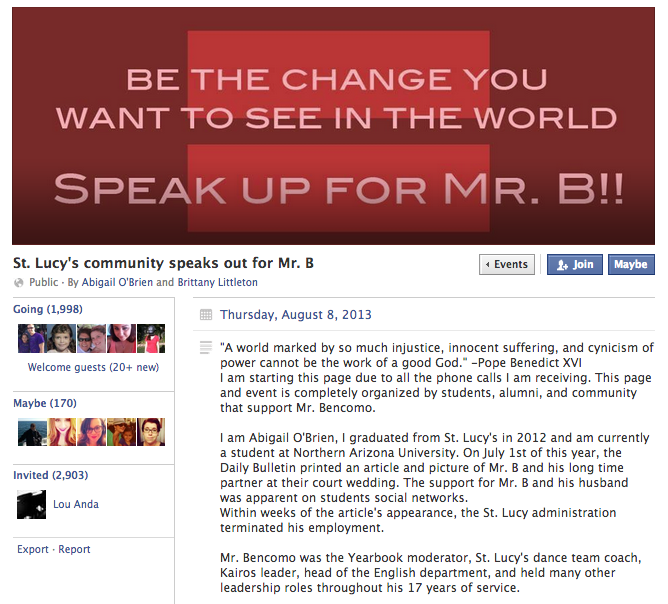 A gay teacher at a Catholic school in Southern California was fired after a picture of his marriage  was published in a local newspaper.

Ken Bencomo was a teacher at St. Lucy’s Priory High School in Glendora for 17 years and served as a yearbook advisor, dance coach, and head of the English department. He married his partner, Christopher Persky, last month and was fired from the school twelve days later.

Bencomo and Persky have been together for ten years and were among the first gay couples to marry in San Bernardino County after the U.S. Supreme Court decided to approve same-sex marriage in California. According to Bencomo’s attorney, he was fired because his marriage was in the papers and it violated church’s teachings. However, the school’s staff and students were aware of his sexuality, for he had brought Persky with him to school events.

The move has been controversial, eliciting a backlash from students around the region.

“To me, [being tolerant of homosexuals] doesn’t violate church teachings. I know from my time in church that my priest preaches about spreading love, and not hate,” says 10th grader Louel Ibe, a gay student at Grover Cleveland High School. “I view the school board’s decision to fire him as more of a homophobic act.”

“I think his action broke the Catholic law, but we shouldn’t judge him,” says Young Lee, a freshman at the Catholic high school, Immaculate Heart. “Only God can judge people.”

Current students and alumni at St. Lucy’s Priory High School have started an online petition, which now has more than 50,000 signees, to support Bencomo. Two thousand supporters joined a Facebook event in solidarity with Mr. Bencomo and held a rally in support of him on August 8.

According to the event page, “St. Lucy’s taught us to be respectful, ambitious, and classy; it is imperative that we display those standards. Mr. Ken Bencomo should not lose his livelihood. Be a part of the change.”

Almost two months before he was fired, Bencomo renewed his contract with the school. His attorney says that the school should “make a fair and reasonable proposal to resolve this.”