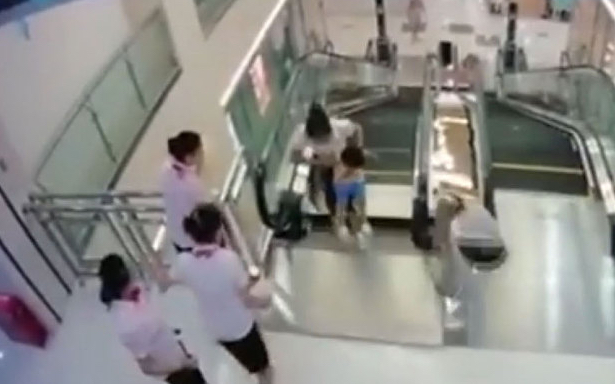 This July, video footage of an escalator accident in a Chinese department store went viral. Not only was it an extremely tragic accident, it also portrayed how strong a mother’s instinctive love can be.

In the security camera footage, 30-year-old Xiang Liujuan is shown holding her son’s hands as she steps off of the shopping mall escalator when suddenly, a panel in the floor suddenly collapses. As she falls down through the open hole, Xiang instinctively pushes her son into the arms of an onlooker before she is sucked into the mechanism of the escalator as it continues to operate. Rescue workers searched for four hours before Xiang was discovered dead.

The video has evoked anger among viewers, as it highlights the safety risks associated with a safety regulatory system in China that is not as rigorous as other modern countries. This is not the first case in which a Chinese citizen has died from a safety issue. The video has also, however, demonstrated the power of parental love.

Mina Yoo, a mother of a daughter and a son, told JSR that any mother would have done the same thing without hesitation.

Yet, Yoo also emphasized the importance of exercising caution.

“Although I admit that I am a little bit more cautious when riding escalators after watching this video,” she offered, “I don’t think the problem is the escalators. Rather, I think the real problem is how ignorant people are about safety. Manmade disasters can be prevented if we care more about safety. If one thinks that escalators themselves are problems, that is equivalent to stating that even stairs can become problems.”