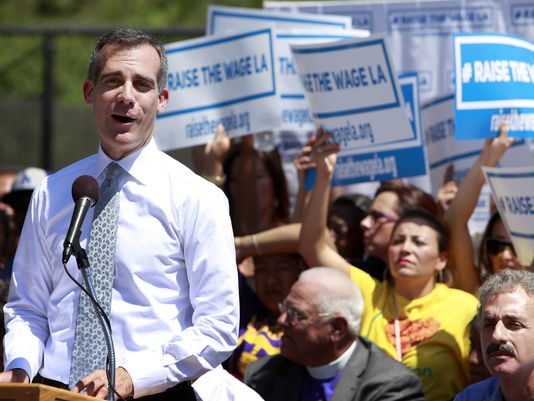 On September 24, the Los Angeles City Council voted 12 to 3 in favor of raising the minimum wage for employees of large hotels to $15.37 an hour.

Over the course of a year, a campaign for higher wages known collectively as Raise LA was led by the Raise LA Coalition, an organization aligned with Los Angeles’ labor movement, local community councils, and the American Civil Liberties Union (ACLU). In response, council members Nury Martinez, Curren D. Price Jr. and Mike Bonin presented the initiative to the rest of the city council in February.

“The lives of thousands of workers will be improved,” said Councilman Price in an interview with Los Angeles Daily News. “They’ll be making a living wage that will permit them to provide for their families.”

State Assembly Bill 10, passed last year, raised California’s minimum wage to $9 an hour starting in July and will raise it another dollar in 2016. However, workers of the hospitality industry claimed that these wages were not enough to support their families and their livelihoods. According to the ordinance, over 40% of Los Angeles hotel workers earn an income that places them below the federal poverty level.

“A great unfairness is that people work full time for wages that do not bring them above the poverty line,” said Councilman Bonin to Raise LA activists who gathered in front of the city hall on the day the ordinance was passed.

“I think $15 is a very reasonable minimum wage,” said Kyung Chang, who held a part-time job at a hotel prior to the establishment of the new minimum wage, in an interview with JSR.

“Before the raise,” Chang added, “the wages did not allow families to earn a livelihood.”

Opponents of the ordinance have claimed that the councilmembers did not take into consideration the economic impacts of a higher minimum wage. Robert Amano, executive director of the Hotel Association of Los Angeles, has said that the wage increase will cause 1,450 job losses.

“A minimum wage should be citywide,” Amano said in an interview with Los Angeles Times, in reference to the fact that the ordinance exempts hotels with unionized workforces from the wage increase and only applies to hotels with a certain number of rooms. In the Times, Amano said that Mayor Eric Garcetti’s separate proposal to raise the minimum wage for all hourly workers across the city is “a more sensible approach.”

However, a study by the Economic Policy Roundtable predicts that the new policy will generate over $70 million for the city’s economy.

Such efforts to raise minimum wage have been echoed by members of the fast food industry. Through a movement called Fight for 15, fast food workers’ rallies for higher wages have reached more than 160 cities and 33 countries. Seattle is raising its minimum wage to $15 an hour, and several states along with the city of San Francisco will vote on ballot measures in November that aim to raise their minimum wages.

“For both the hospitality and fast food industry, wages should equal the amount of work [that workers] do,” said Chung, who called the ordinance “a step closer toward giving workers the wages they deserve.”